Giancarlo Stanton has a grade 2 hamstring strain that will keep him out of the Marlins lineup for at least a few weeks, and that's in a "best-case scenario." Stanton underwent a MRI on Tuesday, one day after pulling up lame while running the bases.

"No real timetable," Stanton said. "We don't know how long it will take. Best (case scenario) is probably two or three (weeks). The reality? I don't know really. I've got to be able to walk a normal pace first before I can predict all that." 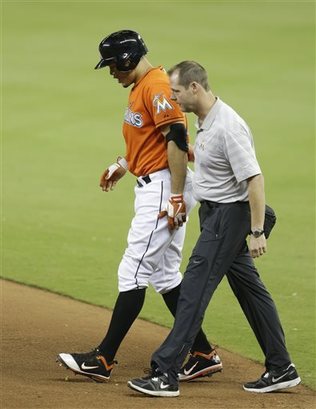 Stanton and first baseman Joe Mahoney were placed on the 15-day disabled list immediately following the Marlins' 4-3 win over the Mets in 15 innings. Mahoney is also on the DL with a strained right hamstring. But he said a MRI showed his injury to be not quite as severe as Stanton's -- a "grade 1 plus or 2," he said. As a result, Mahoney said he is hoping to be back on the field after the 15 days are up.

Stanton, however, could be out considerably longer. Compounding Stanton's frustration: he was starting to show signs of finding his groove at the plate and was looking forward to the Marlins' once-a-season road trip to Southern Califoria, where he's from. The Marlins play in San Diego and Los Angeles next week.

"There's really never a good time, but this is probably one of the worst times," Stanton said. "It's just more of 'Here we go,' this month (-long) process to bring everything back. If we could just erase all of April that would be lovely."

With Stanton and Mahoney going on the DL, the Marlins promoted outfielder Marcell Ozuna from Double A Jacksonville and pitcher Brad Hand from Triple A New Orleans. Hand was brought up as insurance after the bullpen was forced to cover 11 innings in Monday night's win.

Ozuna is one of the Marlins' top prospects (No. 5, according to Baseball America) and with Stanton going down was immediately thrown into the starting lineup. He'll bat sixth tonight against New York and play right field. 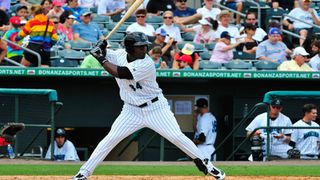 The 22-year-old native of the Dominican Republic said he didn't sleep a wink Monday night after finding out he was headed to the majors. It's a quick jump for Ozuna, who spent last season at Single A Jupiter (.266 with 24 home runs and 95 RBI), missed the initial part of this season at Jacksonville with a broken left wrist, but has been on a tear since joining the Suns' lineup (.333 with 5 home runs and 15 RBI in 42 at bats). He was the Southern League Player of the Week for April 22-28. Defensively, Ozuna won the Rawlings Minor League Gold Glove Award for his play in right field last season with Jupiter.

"I'm so excited, the first time coming over here to play with the big guys," Ozuna said, adding he thought the earliest he might be called up would be June or July, after some additional seasoning at the Double A level.

Ozuna said he was watching a Bruce Willis movie ("Fuego contra Fuego") when he received a phone call telling him he was being promoted.

Manager Mike Redmond said he likes the energy Ozuna brings to the field.

"He's a got a great personality, he's always smiling," Redmond said. "Last year I managed against him when he was in the Florida State League, and I just liked the way he played. He was playing with one pants leg down and one up, and I was, like, 'What's wrong with this guy?' I don't know if it was on purpose or not. But he just looked like a mess out there and I thought, I kind of like this guy. This guy is just having fun."

Redmond said Ozuna is an aggressive swinger, "but he's got a lot of power and I think he'll always have to work on getting good pitches to hit. But I think he has that ability to swing the bat. And the way he plays, he's got nothing to lose. That's the way he plays, with that nothing-to-lose attitude. He's an energy machine."

-- Despite giving up the go-ahead run in the top of the 15th on an infield hit by Ruben Tejada, Jon Rauch threw a personal record 60 pitches and earned the win when the Marlins came back in the bottom of the 15th. The most pitches Rauch had ever thrown as a reliever in one game: 47 in 2006.

-- The Marlins and Mets combined to go 3 for 31 with runners in scoring position.

-- With two steals on Monday, Juan Pierre raised his career total to 599 in 1,904 games. Since 1912, according to research provided by STATS, LLC, Pierre will become the ninth-fastest player in MLB history to 600 stolen bases. The fastest: Rickey Henderson (971 games). Pierre ranks 14th on MLB's all-time stolen base list and needs 21 to tie Otis Nixon for 13th.

-- Desperate times called for desperate measures Monday and, with his bench completely depleted from substitutions and his bullpen almost completely wiped out, Redmond said starting pitchers started to volunteer their services. "They knew the situation we were in," Redmond said. "We were out of players and the pitchers were coming up to me going, 'Hey Mike, I played first in high school. If you need me to pinch-hit, I can do that. Ricky (Nolasco) said 'I played the outfield once.' And it was kind of fun because it was all hands on deck. The pitchers were back there in the cage, hitting off the machine. Kevin Slowey (who is on the mound tonight for the Marlins) spiked up. He's down in the bullpen. He said 'Red, if you need me, I'll be down there. Just let me know.'" 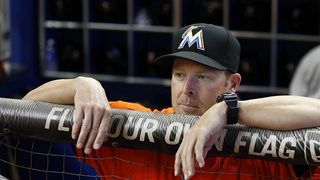 -- There were a number of second-guess situations involving both managers in Monday's game. One example: the top half of the 15th when the Mets scored the go-ahead run. With runners at second and third and pitcher Shaun Marcum on deck, the Marlins elected to pitch to Ruben Tejada, who singled into the hole to put New York on top. Asked if thought about intentionally walking Tejada to get to Marcum (.128 career hitter), Redmond replied: "I did (think about it). He had him 1-2, and I really thought he'd get him out, and the guy rolled the ball through the six hole. In hindsight, if I had to do that over again, would I walk him? Maybe. That's one of those situations you just learn from."

-- Redmond was also asked about the situation in the bottom of the fourth when the Marlins had runners at first and second with two outs. Redmond allowed pitcher Jose Fernandez to bat for himself even though he had no intention of sending him back to the mound (Fernandez had already thrown 81 pitches). "We were short players (Mahoney was unavailable), and we were down a run. It was the fourth inning. I sat up there last night in the 12th or 13th going, 'Man, I'm glad I didn't pinch-hit for him there." We would have been out of players in the ninth." When it was mentioned that if Redmond had pinch-hit for Fernandez, the result might also have been a RBI hit -- or more -- he replied: "That's the beauty of the game. There's so many situations that come up. And believe me, I sit there and I think to myself, 'Oh man, I should have done that or could have done that.' There's a lot of stress. There's a lot that goes into it. I learn something new every night, and I love it. I love being in the fire and having to make those decisions. Now, I may be completely bald by the All-Star break. But I'm already married and have kids, so I guess that's good."

Slowey/Meals: Slowey has made one previous start with Meals behind the plate, giving up six hits in 24 at bats. He struck out 10 while walking just one.

Hefner/Meals: Like Slowey, Hefner has also made one previous start with Meals calling balls and strikes. He, too, gave up six hits in 24 at bats. He struck out four and walked one.