Joe Strong was 37 when he made his major league debut with the Marlins in 2000, which is the same year in which another relatively old player -- 30-year-old Chuck Smith -- also made his MLB debut with the Fish.

Until a few days ago, Strong and Smith, both pitchers, were the only "30 somethings" to make their big-league debuts with the Marlins.

Then 31-year-old Ed Lucas hit the scene. Lucas became the oldest non-pitcher to debut with the Marlins, and he's making quite an impression. On Sunday, Lucas had a 4-hit performance in the Marlins' 11-6 win over the Mets. 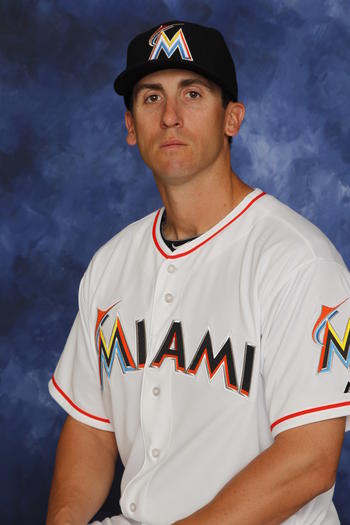 "It's been an unbelievable ride thus far," Lucas said. "The first couple of days here, I was just trying to get acclimated, and trying to knock all those original milestones out of the way. I got my first hit, and we've been winning. I saw my name in the lineup today and today was the first time I got to the park and said, 'Okay, I'm here. Let's play baseball.' It's not so much about me anymore. It's about the team."

Except so much of the last few days has been about Lucas, an Ivy Leaguer (Dartmouth) who is so articulate that he says "thus far" instead of "so far" and has been a breath of fresh air on a team that could use a heavy dose of it. I mean, the Marlins have been winning in his presence.

"I will take absolutely zero credit for that," Lucas said, laughing.

Lucas' new teammates admire his perseverance, hanging on to his dream through 10 minor league seasons, and are openly pulling for the guy.

"It's a great story," said pitcher Kevin Slowey. "We've got a handful of great stories in this clubhouse, and Ed's right at the top of the list, the way he's persevered. I don't think anybody would have blamed him if four, or five, or six, or seven, or even eight years in, he said, 'Hey wait, guys. It's time for me to go ahead and start my next life,' which we'll all inevitably get to. But to see him come up here, have an opportunity and succeed, and be so joyful about it, it's infectious. He's the kind of guy who's perfect for this team."

Chris Coghlan also had four hits Sunday, making it the 16th time in franchise history that the Marlins had at least two players collect four or more hits in the same game.

Had Greg Dobbs not homered in Sunday's eighth inning, the Marlins' power drought at home would have reached 11 games without a home run. To put that into perspective, since 1993 -- the year the Marlins joined the majors -- only one other team has had a longer drought in their own ballpark. Last year's San Francisco Giants went 16 consecutive games at AT&T Park without connecting. The Giants, naturally, then went on to win the World Series. The Marlins have now hit exactly two home runs in their past 17 games at Marlins Park, prompting one scout I spoke with to quip about the Home Run Sculpture: "That thing will rust before it wears out from use."