The next stop for Henderson Alvarez: the Marlins' starting rotation.

Alvarez made his final rehab start on Friday for Double A Jacksonville, and his pitching line indicates that it was a dandy. Alvarez gave up only two hits and didn't permit any runs over 7 2/3 scoreless innings. He struck out six and didn't walk any batters. [Click on story here.]

"He's going to be on his way," said manager Mike Redmond. "He'll throw a bullpen here tomorrow and we'll figure out what we're going to do as far as where we're going to fit him in." 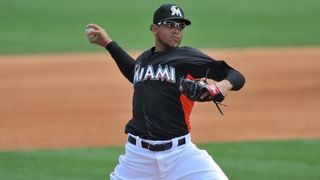 Alvarez is lined up perfectly to take Ricky Nolasco's spot in the rotation and could be on the mound for the Marlins on Wednesday in Atlanta if Nolasco is traded before then.

The 23-year-old right-hander from Venezuela was a key piece in the blockbuster trade with Toronto in November but has yet to throw a pitch for the Marlins after spending the first half of the season on the DL with right shoulder inflammation.

"Everything I've heard has been really positive, how he feels, his arm strength and the way he's pitched," Redmond said of Alvarez's four rehab outings -- two with Single A Jupiter and the other two with Double A Jacksonville. "Each rehab start he's improved."

Collectively, Alvarez in his four rehab appearances gave up only three earned runs in 24 1/3 innings (1.11 ERA), struck out 15 and walked just one.