The Marlins placed Miguel Olivo on the restricted list after the team refused his request to be released and he walked out on the club at the start of Friday's game.

Marlins manager Mike Redmond said on Saturday that if Olivo had waited until after the game, perhaps the team's reaction would have been different. As it was, it made a team already dealing with back injuries to Logan Morrison and Placido Polanco even more shorthanded. 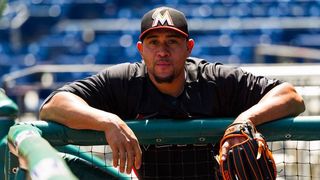 "I've never been involved in something like that -- to have somebody just leave after batting practice," Redmond told reporters. "I think everyone was kind of in shock. I know it wasn't an ideal situation for him, not getting to play a lot, but at the same time the team relies on you."

Olivo's playing time dried up after Jeff Mathis returned from the disabled list on May 14, leaving the Marlins with three catchers on the roster. With Mathis and Rob Brantly sharing the catching duties, Olivo had started just once -- as a designated hitter -- since May 12.

Olivo said he has asked to be released three separate times, but his requests were always refused.

"They say we need you for pinch-hitting," Olivo said. "I said I've never been a pinch-hitter in my life. That's not my game."

Olivo said he once again pleaded for his release with Marlins general manager Michael Hill before Friday's game, but to no avail. Olivo said he then watched the first inning from inside the clubhouse before showering, dressing and leaving.

Olivo can't sign with another team while on the restricted list, nor will he continue to be paid the remainder of his $800,000 salary.

"I'm just praying to God they release me and don't be selfish," he said. "I've been very professional. I've done everything I could to help the team. They're only hurting one person, and that's me. I'm a nice person. I don't want to hurt nobody."

Olivo, who was signed by the Marlins at the end of spring training, hit .203 with four home runs in mostly part-time duty with the Marlins. The Marlins called up outfielder Jordan Brown from Triple A New Orleans to fill Olivo's spot on the 25-man roster.