Outfielder Alfredo Silverio, the Marlins' top Rule 5 draft pick in December, on Wednesday underwent Tommy John surgery on his right elbow for the second time in 14 months, according to Marlins president of baseball operations Larry Beinfest.

The latest setback for Silverio places his future with the Marlins in doubt. It's possible the Marlins will return Silverio to the Dodgers.

"I don't know what we're going to do," Beinfest said. 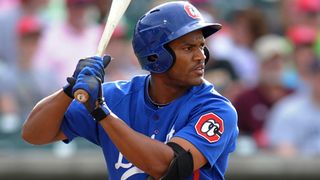 Silverio, 26, was one of the top prospects in the Dodgers farm system before he suffered multiple injuries in a car accident that caused him to miss the entire 2012 season. But the Marlins gambled, taking him in the Rule 5 draft in hopes he could repeat his 2011 season when he hit .306 with 16 home runs and 85 RBI at Double A.

Silverio, a native of the Dominican Republic, was considered a five-tool player. But, among multiple injuries stemming from the car accident, he suffered concussion syndromes and rquired Tommy John surgery on his throwing arm.

Silverio has spent the entire season for the Marlins on the 60-day disabled list.