The Marlins have agreed to terms with their top draft pick, Colin Moran.

Moran, a third baseman out of the University of North Carolina, was offered the slot value for the sixth overall pick: $3.52 million. Completion of the deal is pending a physical.

The Marlins are not expected to sign their third-round pick, high school infielder Ben Deluzio, before Friday's 5 p.m. deadline. Deluzio is expected to honor his commitment to Florida State.

Here's an in-depth article on Moran that appeared recently in the Lower Hudson Valley News in New York. A few of the interesting tidbits from Josh Thomson's article: 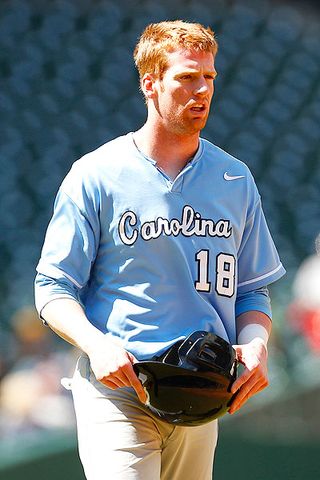 -- “He’s always been kind of a drawn-back, quiet type of guy,” said catcher Brian Holberton, Moran’s freshman-year roommate. “Once you get to know him, he’s cool. He opens up. But he’s kind of quiet to the media and the public. That’s just his personality — but he doesn’t play like it."

-- He was born into a family of athletes, one that sent two of his uncles to the major leagues and a brother to Triple-A (for now), and produced a grandfather perhaps better than them all. Dick Surhoff played in the NBA and was later a fast-pitch softball legend; sons B.J. and Rich were big-leaguers, B.J. for 17 years; and Brian Moran pitches for the Seattle Mariners’ Triple-A affiliate in Tacoma, Wash.

-- He stands every bit of the 6-3 listed on North Carolina’s roster and could pass for 2 or 3 inches taller on a football field or basketball court. He has gained 40 pounds since high school and now registers at a sturdy 215. Where his shoulders and hips were once narrow, they are now broad, even for a soon-to-be pro. His hair is cropped tight and as red as a hayfield at dusk. Even his jaw has squared and finally looks capable of handling a beard after three years away at college.

-- Moran notoriously acted his age during his sophomore season when he punched a bathroom wall and broke his hand after committing a costly error in the seventh inning of a loss to North Carolina State. That outburst cost him 21 games and was reminiscent of past moments of frustration at Iona Prep, where he would bury his hand in his helmet and smack the ground after a bad at-bat.

Mike Fox, the Tar Heels’ coach, believes Moran demands too much of himself. “It’s his best trait, and at times it’s been his worst trait,” Fox said.