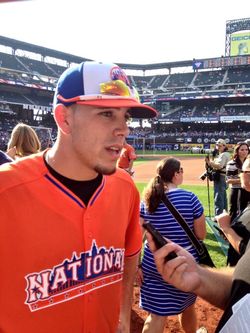 Fernandez, who spent the early parts of Monday night snapping photos on his cell phone of the Home Run Derby, said he's fairly confident he will get to pitch in Tuesday's All-Star Game.

"I talked to the pitching coach and most likely I'm pitching," Fernandez said. "I don't know what inning. But I'm good to go.

"It's going to be fun for sure. I don't think it will be early in the game. Older guys will go first and then there's a space. I have no idea how it's going to go. Whatever it is, I'm going to enjoy it."

Fernandez's agent, Scott Boras, said Fernandez's first half numbers (5-5, 2.75 ERA, 103 Ks, 40 BBs) put himself in the realm of young aces Stephen Strasburg of the Nationals and the Mets' Matt Harvey.

Asked if the Marlins have started discussing long-term plans for Fernandez, Boras said: "I've talked to [owner] Jeffrey [Loria] a number of times, but we have not talked about that.

"Obviously he's got five more years there and I think he enjoys playing for the Marlins," Boras said. "It's something that if the team decides to look at that, we'll have to evaluate it and go from there."