Not only didn't the Marlins make any deals before today's 4 p.m. deadline, they "never really got the sense that anything was (ever) close," according to Larry Beinfest, Marlins president of baseball operations.

"We made a bunch of deals in the last year," Beinfest said. "Today wasn't our day."

The Marlins decided to stick with the cast of logical trade suspects -- Chad Qualls, Greg Dobbs, Ryan Webb, Juan Pierre, Justin Ruggiano -- rather than trade them off for what would have been a very negligible return. The Marlins feel they were better off keeping those players in an attempt to win as many games as possible with a roster largely designed around younger, developing players.

"Part of the development for young players is winning, learning how to win, and knowing what it feels like to win," Beinfest said. "It was important for us to try to win here for the last 55 games. If you look at some of the would-be free agents, or guys that are maturing in terms of service time, if we didn't think they were important for us to be here and were not productive, obviously we'd make a move. But I think some of our more experienced players are filling vital roles here. And we looked at it in total and said 'Okay, what is their contribution to the team, both in the clubhouse and on the field?.' We decided, based on what we did today -- which was nothing -- that some of the players here that have more experience are important to stay."

The bullpen, in particular, was an area the Marlins didn't want to touch because the front office felt a need to provide their young starting staff with solid relief support that the current group has been providing.

Beinfest acknowledged that "we threw something out late" in terms of a trade, but "we got a response after the deadline that it wasn't goig to happen anyway."

The Marlins were rumored to be offering Placido Polanco to the Yankees, who are in search of a third baseman. But nothing came of it.

The Pittsburgh Pirates made a "significant offer" for Giancarlo Stanton, but the Marlins didn't bite, according to a Pittsburgh newspaper. But a source said that, while the Marlins have received many offers for Stanton, they did not receive a single one from the Pirates.

As one would expect, Qualls became the brunt of some significant ribbing from his teammates and friends about the league following last night's fist pump and stumble episode. Teammates dressed up a mannequin like a sniper -- with a bat used in place of an actual rifle -- and stationed it in the second deck, aiming to the point on the field where Qualls took his fall (click on photos to enlarge). Qualls' jersey was placed inside crime tape where he fell. 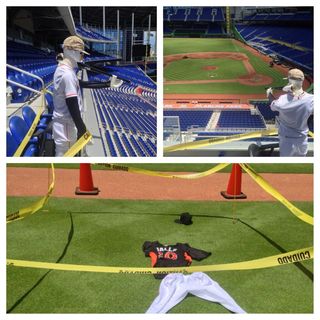 Qualls provided an explanation of what exactly happened after he struck out the Mets' Omar Quintanilla in Tuesday's eighth inning:

"Four or five pitches before that, I kind of rolled my ankle a little bit, and I was 'Oh, okay, I'll be all right.' And then, once I got the strikeout, I was pretty excited. I play this game with a lot of passion. So I probably went for too bit of a fist pump there, and then my ankle fully rolled. At 245 pounds, you can't really stand up. So I just tucked and rolled and popped up, and in my head pretended nothing happened. But by the time I got to the dugout, I was like, 'Man, that just really happened.'"

"I think I've seen it like a thousand times."

The pranks didn't end with the crime scene layout. When the Marlins came out to the field to stretch before batting practice earlier today, teammates had arranged to have the Marlins' in-house entertainment crew create a video/music montage on the videotron of Qualls' fist pump and fall, accompanied by the Blue Danube Waltz and Tom Petty's "Free Fallin'"

In case you haven't seen the video of Qualls' blooper reel special, here it is:

Jose Fernandez turned 21 today. And just how did he intend to celebrate?

"I'm going to go to dinner with my mom," Fernandez said.

"No, not really," he said. "I had a little champagne last night with my mom."

Fernandez said he accomplished his baseball goal of reaching the majors before the age of 21.

"Now I've got to set another goal," he said.

Double A Jacksonville manager Andy Barkett weighed in on the Tino Martinez/Derek Dietrich fallout when he talked about the incident to the Florida Times-Union in this story by Jeff Elliott.

Former big-league pitcher Frank Castillo, whose only start with the Marlins in 2005 was the final one of his MLB career, drowned in Arizona this week.

The sale of LHP Duane Below, who made two relief appearances this season for the Marlins (0-1, 10.13), to the Kia Tigers of the Korean Baseball Organization is pending a physical.

Ed Lucas is starting at shortstop tonight in place of Adeiny Hechavarria, whom manager Mike Redmond is giving a breather. Lucas' first MLB start for the Marlins was at shortstop on May 31. This marks his first start there since.