Rocky Mountain High: Yelich, Marisnick on their way up

DENVER -- Christian Yelich and Jake Marisnick -- two of the most promising young prospects in the Marlins' farm system - will make their way to the Mile High City on Tuesday and then make their big league debuts.

Yelich, the Marlins' #2 ranked prospect by Baseball America, will start in left with Marisnick in center.

To make room for the two outfielders, the Marlins optioned infielder Derek Dietrich and outfielder Marcell Ozuna to Double A Jacksonville.

"I want to make this really clear, that the offensive woes of this team I don't want attributed to them," said Larry Beinfest, president of baseball operations, in making the announcement. "That's not why this is happening. Those kids did an incredible job. We rushed them here to the big leagues out of need. They had almost no Double A experience, and they did a great job for us."

But it was clear in watching their at bats in Milwaukee that Dietrich and Ozuna were struggling badly, often swinging at pitches far out of the strike zone.

"We just thought it warranted a time to go down to the minor leagues and work on some offensive things on both their parts," Beinfest said. "We asked a lot of them, putting them in the middle of the lineup. They're part of our future, and part of our future is coming as well."

The Marlins have had high hopes for Yelich after since they drafted him in the first round in 2010. They acquired Marisnick, a skilled defensive outfielder, among a package of players in the blockbuster deal with Toronto last November.

"This is a good time to bring them and let them have the experience," Beinfest said. "As a general rule, we don't like sitting young players, and they're not coming here to sit."

Manager Mike Redmond confirmed as much, saying the two newcomers would be in Tuesday's starting outfield with Giancarlo Stanton.

The Marlins will have to make room for Yelich and Marisnick on the 40-man roster, most likely with players already on the disabled list, Beinfest said.

In the photo below, courtesy of the Jacksonville Suns, Yelich and Marisnick are congratulated by their teammates before heading off for Colorado to join the Marlins. 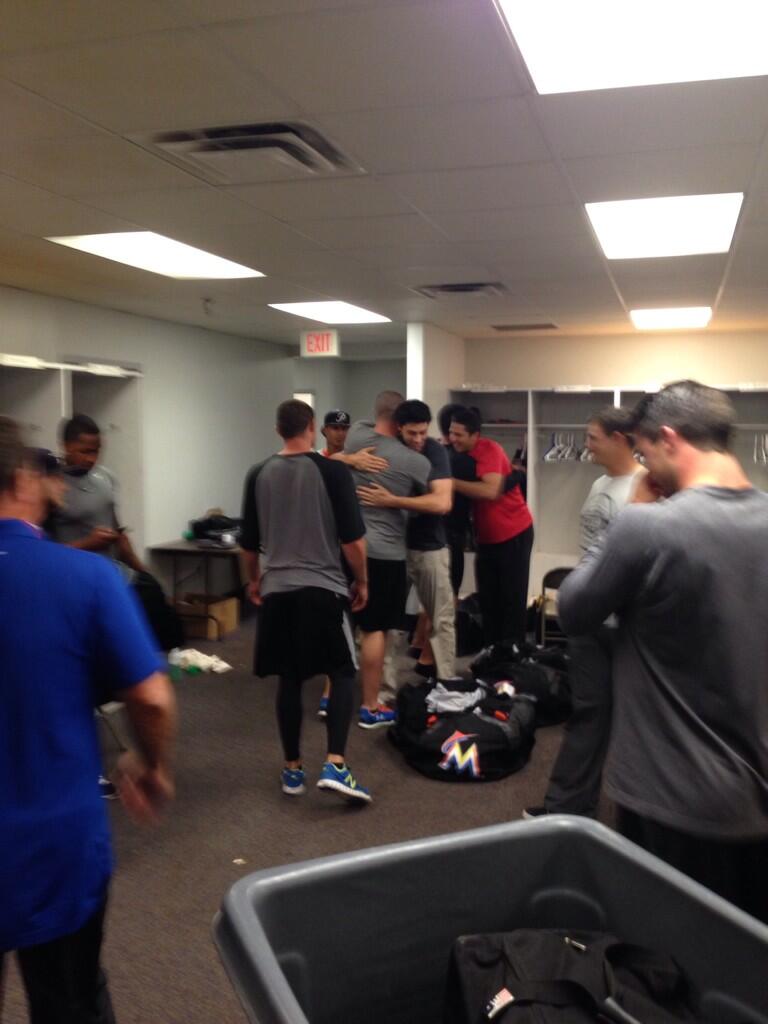