Mike Redmond not a fan of Waffle House

ATLANTA -- There may be no better breakfast expert than Marlins manager Mike Redmond, who once belonged to a group of Marlins players who called themselves the "Breakfast Club." Members included Mike Lowell, Andy Fox and Brian Banks. They scouted out the best breakfast diners in every major league city and gathered there every morning on game days to get their fill of eggs, bacon and toast. Not on the list, apparently: Waffle House. 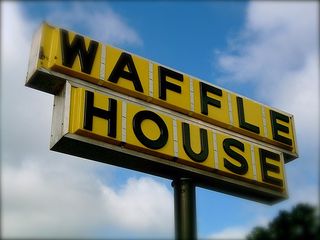 Redmond did everything but held his nose and groan when he was asked about a Waffle House that opened inside Turner Field on the same day the Braves began their 14-game winning streak. Some fans are even crediting the newly installed Waffle House for the Braves' hot streak.

"I heard that about the Waffle House," Redmond said. "I think that's crazy. Have you ever been to Waffle House? Wow. I can't believe it's in the ballpark."

Redmond said he's dined at Waffle House "a couple of times before, and it didn't treat me well."

Redmond said he prefers a couple of other popular breakfast establishments, such as Cracker Barrel, to Waffle House, which seem to be located at every interstate exit in the Atlanta area. In fact, near the hotel where I'm staying, there are actually TWO Waffle Houses at the same exit -- one on either side.

Safe to say, Redmond probably won't be doing any endorsements for the breakfast chain anytime soon.