Add another third baseman to the list being considered by the Marlins: Yuniesky Betancourt. According to Herald colleague Barry Jackson, the Marlins have touched base with representatives for Betancourt, and the interest might be mutual. 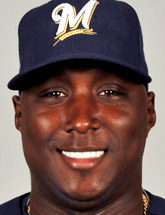 The Marlins have inquired about free agent third baseman Yuniesky Betancourt, 31, a .261 career hitter who hit .212 with 13 homers and 46 RBI for Milwaukee last season.

Betancourt can play every infield position but the Marlins are considering him –-- and several others –-- primarily for third base. His agent, Miami Sports Management’s Alex Esteban, wouldn’t comment on the Marlins’ interest but said Betancourt would have interest in Miami.

Betancourt was used exclusively as a shortstop throughout most of his career. But the Brewers had him playing third (59 games) and first (68g) last season. Betancourt figures to be a less costly alternative to Juan Uribe, another free agent third baseman the Marlins are considering. Last year, Betancourt made $900,000 with Milwaukee.

The moves bring the total to 39 players.

Did the Marlins just lose a potential future trade partner for Giancarlo Stanton when the Texas Rangers landed Prince Fielder in Wednesday's blockbuster deal with Detroit? In Fielder, the Rangers acquired the power bat they've been wanting. And sending Ian Kinsler to the Tigers frees up a spot for Jurickson Profar at second base.

The Marlins have stated repeatedly that they have no intention of trading Stanton this winter. But if they don't work out a contract extension with their young slugger, they could decide to deal him. And Texas has been mentioned frequently as a potential trading partner, with much of the speculation centering on Profar as part of any exchange.