The Marlins signed veteran outfielder Reed Johnson to a minor league contract that includes an invitation to spring training.

Johnson, 37, has spent 11 seasons in the majors with the Blue Jays, Cubs, Dodgers and Braves. Johnson, who swings from the right side, has a career .282 batting average.

The Marlins now have 26 non-roster invitees on their spring training roster.

Save for shortstop Adeiny Hechavarria, the Marlins will have an entirely new infield next season -- which is a good thing they also have Perry Hill lending his defensive expertise to the new crew. According to a Boston Glove report that was published Sunday, Hill ranks as the best infield coach in the majors. He was the only member of the Marlins' coaching staff to receive mention. 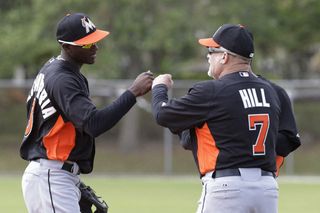 Wrote the Globe: "Generally regarded as the best infield guy, using metrics and other new-age methods to get what many consider the best results in baseball."

Globe columnist Nick Cafardo compiled the rankings based on the input he received from GM's, players, writers and other coaches. It wasn't a scientific survey, and it does seem weighted toward coaches with the Red Sox. But Hill's reputation is such that his top ranking hardly comes as any surprise.

Click here to read the Globe's story and coaching rankings.

If the Marlins' young pitching staff continues to impress and improve, I suppose an argument could be made for Chuck Hernandez. But, keep in mind, the Globe only lists a Top 5 for each coaching discipline -- the cream of the crop, in other words. The Marlins also have two new coaches joining the staff in hitting coach Frank Menechino and baserunning/outfield coach Brett Butler.

Posted by Clark Spencer at 9:32 AM | Permalink | Comments

The Marlins have indicated to Giancarlo Stanton that they'd like him to stick around past the point he becomes eligible for free agency. Whether Stanton would ever agree to a contract extension keeping him in Miami beyond the 2016 season is anyone's guess, and many feel the Marlins are facing an uphill battle.

Still, Marlins general manager Dan Jennings said Thursday in a radio interview that the team is interested in getting a long-term deal done with Stanton, and sooner would be better than later.

"We have had conversations with his representatives," Jennings told Jim Bowden and Holden Kusher on Sirius/XM's "Inside Pitch." "Anytime you're looking to long-term someone, certainly the sooner the better."

Stanton and the Marlins recently reached agreement on a 1-year deal that will pay him $6.5 million next season. He'll have two salary arbitration years remaining after this one, at which point he would become eliglble to offer his services to the highest bidder, and given the calls the Marlins have received from other teams expressing trade interest in Stanton, it's safe to say he'll command a hefty deal.

The Marlins know full well that if they have any chance at all of keeping Stanton, it'll take a sweet proposal. Stanton will very likely hit eight figures in his second year of arbitration, and his salary will go even higher in his third and final year. So those would be starting points for the Marlins in negotiating any deal in which they would also try to buy out three or more seasons after 2016.

"There's a bit of comfort that goes to the player knowing he has security for 'x' number of years and to the organization that now has cost certainty for 'x' numbr of years," Jennings said. "In terms of a timetable, we think sooner is better. It has been discussed and talked about with both Giancarlo and his agent. Now it's just a matter of, 'OK, let's continue to talk about this' and come up with a number of years and a dollar (amount) that's going to reflect his value to us in the marketplace and move forward from there."

Posted by Clark Spencer at 12:22 AM | Permalink | Comments

The Marlins avoided arbitration with all three of their eligible players -- Giancarlo Stanton, Steve Cishek and Mike Dunn -- before Friday's 1 p.m. deadline.

Stanton landed the biggest contract of the three, agreeing to a 1-year, $6.5 million contract. According to Ken Rosenthal of Foxsports.com, Stanton will also receive a $100,000 bonus by reaching 600 plate appearances.

Stanton's contract is not a Marlins' team record for a first-year arbitration player. That mark belongs to Miguel Cabrera, who landed a $7.4 million deal in 2007.

Had the Marlins not reached agreements by Friday's deadline, they would have gone to a hearing with the players and have an arbitrator settle the dispute. Cabrera had his '07 contract settled in that manner.

The question now becomes: Will it be the last contract Stanton signs with the Marlins? The two sides have not discussed a long-term extension, and with two arbitration years remaining, the team could decide the best time to trade might be after the upcoming season. Or, they could make Stanton an offer after the season, one that he could either accept or refuse.

The Marlins have signed right-handed reliever Henry Rodriguez to a minor-league contract with an invitation to spring training. 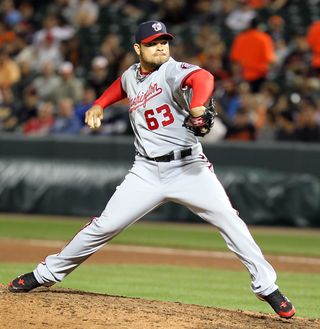 Rodriguez, 26, has spent five seasons in the majors with the A's, Nationals and Cubs, going 5-7 with 11 saves and a 4.24 ERA in 148 relief appearances. Rodriguez has averaged about one strikeout per inning over his career, but has also dealt with major control issues by walking an average of 6.2 batters per nine innings. If he makes the club, the Marlins might need to reinforce the fish aquarium behind home plate with an extra layer of bulletproof glass. Rodriguez led the majors in wild pitches in 2011 with 14 in only 65 innings of work.

He'll be contending for a bullpen spot with the Marlins.

The Marlins also announced Thursday that minor league second baseman Avery Romero had been extended an invtiation to spring training. Romero was the Marlins' 3rd-round pick in the 2012 draft. That puts the spring training roster at 64 players.

Chris Coghlan's up-and-down odyssey with the Marlins is over. Coghlan has signed a minor-league contract with the Chicago Cubs, according to the New York Post's Joel Sherman, that will pay him $800,000 if he makes the majors and an additional $250,000 in incentives based on plate appearances.

The Marlins had non-tendered Coghlan but also spoken to him about returning.

Coghlan's career with the Marlins involved many twists and turns, and more than a few hard landings -- literally and figuratively.

One season after winning the National League Rookie of the Year award in 2009 -- an honor built largely on two outstanding months the second half of that season -- he sustained a damaging knee injury while planting a shaving cream pie in the face of teammate Wes Helms following a walk-off victory.

Coghlan never managed to get on track after that, as he battled knee and back issues, moved from one position to another, and ever re-discovered the hitting consistency that made him so successful as a rookie.

Giancarlo Stanton, Steve Cishek and Mike Dunn have all filed for salary arbitration, as expected. If the players don't reach agreement by Friday's deadline when salary figures are exchanged, they'll have their 2014 salaries determined by an independent arbitrator. The Marlins have a standing policy of refusing to negotiate further and going to arbitration once figures are exchanged.

Kevin Slowey, who worked out of the rotation and the bullpen for the Marlins in 2013 before an injury ended his season, heads a list of 22 non-roster players who received spring training invitations.

Of that number, 16 are players who are already in the organization, such as minor leaguers Andrew Heaney, Colin Moran and Justin Niccolino.

As he did this time a year ago, Slowey signed a minor league deal and will be trying to win an Opening Day roster spot again this spring.

As of today's announcement, the Marlins now have 62 players assigned to major league camp this spring. That number will likely grow as the Marlins look to sign a veteran reliever or two to add to the bullpen.

Pitchers and catchers will hold their first workout on Feb. 16.