JUPITER -- It's not often that major league players take part in political protests, but Henderson Alvarez organized a photo session Saturday morning with a group of his teammates, calling for peace in Venezuela, the pitcher's home country. They stood outside the Marlins' spring training clubhouse and posed with the Venezuelan flag while holding up signs reading "Paz" (peace).

"With the picture I'm hoping to send a message to Venezuela to have peace and to leave the violence behind," Alvarez said through an interpretor. "As baseball players our message has more of a potential to be reached."

Members of the Detroit Tigers, including Miguel Cabrera and Omar Vizquel, sent out a similar picture from Lakeland on Friday. Anti-government factions in Venezuela have been protesting against the government of President Nicolas Maduro. Large-scale protests were expected Saturday in Caracas.

The unrest has become so great that Alvarez sent for his family, which arrived in the U.S. on Thursday.

"My family in Valencia is fine," Alvarez said. "It was my daughter who was affected. She was affected by tear gas, twice. I brought her and my wife to Miami."

It wasn't only Venezuelan players who posed with Alvarez in the photo. Others, including Cuban-born pitcher Jose Fernandez, also participated, as did A.J. Ramos (born in Texas) and Arquimedes Caminero (Dominican Republic).

"We're always supporting one another," Alvarez said. "It's not just a country thing. We always want peace and for the violence to end."

Alvarez, who was obtained by the Marlins in their blockbuster trade with Toronto in November, 2012, is best known for the no-hitter he threw on closing day last season.

In the photo, Alvarez is fourth from right. 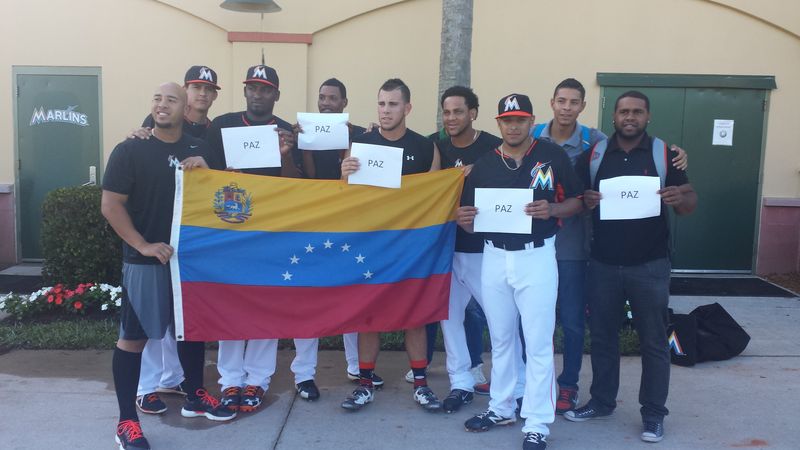