JUPITER -- The Marlins are joining the modern age this spring.

With the help of video coordinator Cullen McRae, some players will begin wearing small cameras affixed to the tops of their caps and helmets in order to gain a brand new perspective that they'll be able to watch and study afterward. And McRae said he also intends to mount a camera on a remote-controlled drone, which will hover above the field and film the routes taken by outfielders on fly balls. 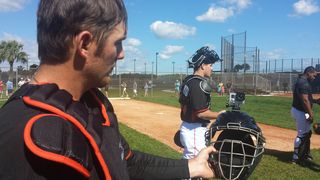 "Just trying to get an edge," McRae said, adding that the camera technology will only be used during drills and not in actual games.

McRae said the idea came out about over the winter while manager Mike Redmond was on a skiing trip. Redmond noticed skiers wearing the cameras on their helmets and asked McRae if it could be done with the Marlins' players.

"I think some teams have dabbled with them," McRae said.

The Nationals, for example, are already using a drone. (In the photograph, Jeff Mathis examines his camera-mounted helmet before catching Jose Fernandez's bullpen on Tuesday).

"It's mostly early on doing drills," McRae said. "It's not going to be anything that interferes with game stuff. I really don't know what to expect. It's just to get a different perspective. I'm just trying to be creative. I've been here 18 years and technology is always evolving. I'm just trying to keep up with technology, and luckily for me, the Marlins have always given me the resources to be able to keep up with the trends in technology."

McRae said the camera are already in widespread use in the X-Game sports.

"The surfers are using them," McRae said. "I saw (surfer) Kelly Slater in a video using it, and (snowboarder) Shaun White."

McRae has ordered a drone and hopes to begin practicing with it by the end of the week.