« Jose Fernandez to start Grapefruit opener Friday | Main | What's in a number? For CF Marcell Ozuna he's hoping 13 turns out to be the right fit » 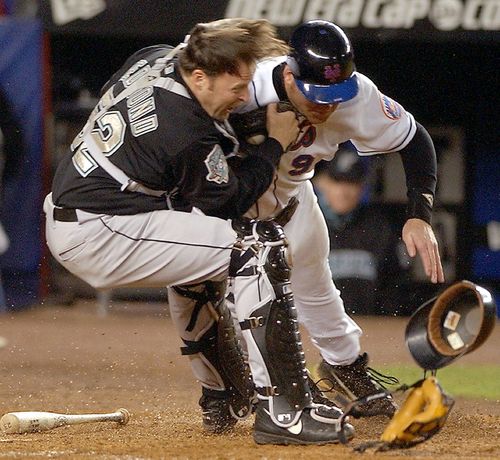 JUPITER -- Ty Wigginton has a number of obstacles to overcome in order to win an Opening Day roster spot with the Marlins. But manager Mike Redmond said a violent home-plate collision he had with Wigginton in 2003 won't be one of them.

If anything, Redmond admires the fact that Wigginton is "a hard-nosed player" who "respects the game and knows how to play the game right."

The play in question occurred at Shea Stadium on April 18, 2003, when Redmond was a catcher for the Marlins and Wigginton was with the Mets. The helmet-to-helmet collision in which Redmond tagged Wigginton and held on to the ball for the out dazed both players. Redmond said he injured his shoulder on the play and was forced to leave the game a couple of innings later.

Redmond called it "probably the hardest collision at home plate I've ever had."

A few years later, when Redmond was with the Twins and Wigginton had moved on to Tampa Bay, the two discussed their home plate run-in.

"I went up to him and said, 'Hey, I got to know,'" Redmond recalled. "I said, 'When we had that collision, that really hurt me. I just want to make sure it hurt you, too. I want to make sure you felt a little pain, too.' He said, 'Oh yeah, Red. I threw up for hours after the game.' So I felt good. At least he didn't just hurt me. He felt a little bit of pain, too. We had a good laugh about it."