Salty gets his World Series ring, plans to wear it around Marlins

NEW YORK -- One of the big reasons the Marlins say they signed Jarrod Saltalamacchia in the off-season was that they wanted his championship-winning experience with the Red Sox to rub off on his new teammates. 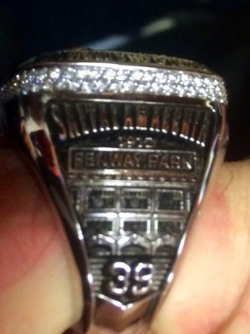 Now, he actually has a World Series ring to flaunt in front of their faces.

Sunday morning, the 28-year old catcher received his reward for helping Boston win its third title since 2004. Allard Baird, Red Sox Vice President of Player Personnel, made the trek over to Citi Field to deliver Saltalamacchia's ring in person. And his new teammates all got a good look at it.

"Bigger than I thought it was going to be, but it's nice to actually have it in hand," Saltalamacchia said. "It's really cool. It fits and they got the name right. I had to check it twice to make sure it’s spelled right."

The ring -- studded with red rubies and sapphires -- has several slogans from the Red Sox run to the World Series on it including Beared Brothers and Boston Strong. It represents everything the team went through during the season, Saltalamacchia said. It's also not too gaudy, smaller than the huge rings Saltalamacchia said he's seen the Marlins front-office personnel wearing from the 2003 World Series season.

"A lot of guys play a long time to get one of these or even make it. So I’m pretty fortunate," Saltalamacchia said. "I plan on wearing it for sure."

Mike Hill, Marlins President of Baseball Operations, doesn't mind that at all. He wants the Marlins to see it and be envious.

"You win one of those they're all special," Hill said. "It doesn't matter what the size is. You know a lot of blood, sweat and tears have gone into that.

"We brought him here for that. That pedigree. We talked about what he brings. Casey McGehee won it in Japan. Garrett Jones was part of breaking that historic drought in Pittsburgh. That's what you play for -- to achieve and to win. Every reminder you can give is positive."

> Even though the Marlins are two games under .500 entering Sunday and have sustained quite a few heartbreaking losses late, Hill said he's been encouraged by the team's play coming off a 100-loss season.

"You guys have seen every single one of our games -- lot of mistakes against good teams," Hill said. "If you're going to make 'em, prefer to make them now and hopefully we don't repeat them. But at this point I really believe a lot of mistakes we've made we'll learn from them and it will benefit us come later in the summer. Part of that whole growth and maturation of a roster, we've gotten right out of the box, which you can't always say.

"But this is a resilient team, a tough team that plays hard day-in, day-out, even after tough losses. And we've had our share of tough losses to say the least. But that's what makes a team battle-tested. I think that's what's going to help us in the long run."

Hill said we haven't seen the best from the Marlins.

"There's a lot of talent," he said. "When we consistently minimize the mistakes against good teams you're going to see us on a roll. As long as we pitch we can play with anybody. That was in the case in Atlanta. That was the case with Washington. You minimize the mistakes and execute the pitches. Our defense hasn't been great to this point. Late innings we've had some missteps. But that's all part of the process of a team gelling and coming together. I truly believe we're going to benefit from that as we get later in the summer."

> As tough a run as it has been for the Marlins bullpen to start the season, left-hander Mike Dunn, who picked up the victory Saturday night with two scoreless innings of relief, said he expects himself and others who have been struggling to bounce back. The Marlins have lost four games in walk-off fashion and another three games on the road by allowing big hits in the eighth inning.

"Last year was pretty tough with the way we lost games too," Dunn said. "I think the experience of being a part of it last year makes it easier to move on this year.

"It’s a six month season, it’s not a spring, it’s a long haul. Over the course of a season everything is going to be ironed out and be fine. We got to see what the bullpen could do last year and what our pitching staff could do on a full season."

> Hill said the Marlins are still waiting on a final evaluation regarding second baseman Rafael Furcal, whose right groin tightened up on him Friday night as he was rehabbing in Double A Jacksonville. In the event the groin is worse than anticipated, the Marlins will pull him off rehab for five, six days and then restart him on it.

"We were starting to see much more consistent at-bats," Hill said of Furcal. "His hamstring feels great. His defense has been solid. So, it's just a matter of making sure his body is ready what he's going to undergo here."