« Cosart Ready but Cautious; Jennings Returns; Homestand Begins; Stanton Flying Solo | Main | Redmond: "For sure [Stanton] should be right up there" in MVP discussion » 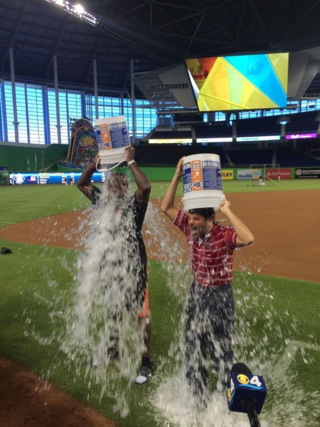 Club president David Samson and Mike Hill, the President of Baseball Operations took the challenge a couple of hours later right before batting practice. Now, the Marlins are offering fans a chance to bid on being the person to douse All-Star Giancarlo Stanton with ice water when he completes the challenge at a later date. Bidding began at 5 p.m. Tuesday and ends at 3 p.m. Friday.

The winner will get the opportunity to visit the Marlins Clubhouse, four batting practice passes, four Diamond Club seats to an upcoming game on a mutually agreeable date, a photo opportunity with the Stanton and of course the bucket of ice water.

"It was cold," Samson said of his ice bath. "I heard about the challenge just [Monday], and was issued it by [Marlins baseball informations manager Marty Sewell]. Of course we were going to do it. Now, I think you have to be taller than I am [to douse Stanton] otherwise we'll supply the ladder because all I can do is dump it on his legs."

The Ice Bucket Challenge was started by friends and family members of Pete Frates on July 29 and has raised $2.3 million in donations for the ALS Association according to USA Today. Frates, 29, played baseball at Boston College. He was diagnosed with ALS, a neurodegenerative condition, back in 2012.

Actors, athletes and even President Obama have either taken the challenge or donated to the cause. Aside from making a donation, the participant gets to nominate another person, who has 24 hours to complete the task.

"We've got Casey McGehee and Garrett Jones who will do it," Samson said. "[Mike Hill] issued the challenge to Mike Redmond, Christian Yelich and Dan Jennings. It's viral right now, which is great. People are doing it all over the country and raising money, and hopefully a cure will come."