Dodgers ace Clayton Kershaw and an 88-mile-an-hour fastball to the face from Brewers pitcher Mike Fiers will probably prevent Giancarlo Stanton from earning the National League's highest honor this season.

But nobody -- not even the great Kershaw -- could stop Stanton from being named the league's best offensive player this season.

The 24-year-old All-Star right fielder became the first Marlins player ever to receive the Hank Aaron Award on Saturday night, a prize handed out to the best hitter in each league annually since 1999 and selected by a special panel of Hall of Fame players and fan votes. The Angels' Mike Trout won it for the the American League after leading the AL in runs scored (115) and RBI (111) while batting .287 with 36 home runs.

Stanton was in San Francisco for Game 4 of the World Series Saturday evening to receive his award alongside Aaron and commissioner Bud Selig.

Stanton missed the final 17 games of the regular season after that Fiers pitch broke cheekbones, chipped teeth, and required stitches to patch up a gash. He still led the league in home runs (37), finished second with 105 RBI (he was leading the league when he was hurt) and hit .288 while stealing 13 bases.

Stanton's honor might qualify as the most prestigious yet.

"These first-time Hank Aaron Award winners are two of our game’s most exciting and talented young players," Selig said in a statement released by MLB. "For as much as they have already accomplished, Mike and Giancarlo have wonderful futures ahead of them, and they will make Major League Baseball proud in the years ahead.”

Asked how the recovery process is going, Stanton told World Series reporters: "It was a long process of just kind of laying around the house, not being able to leave too much. But I feel great now, and I'll be back to my normal off-season routine and shouldn't skip a beat."

Shortstop Adeiny Hechavarria, right fielder Giancarlo Stanton and left fielder Christian Yelich have been named as finalists for the Rawlings Gold Glove award given to the top defensive players at each position.

None of the three players has ever won a Gold Glove.

There are three finalists at every position from both leagues. Among N.L. teams, the Dodgers have the most finalists with four.

The awards are voted on by big-league managers and coaches. Their vote counts for 75 percent of the selection process. The sabermetrics community accounts for the other 25 percent.

McGehee, who spent the 2013 season in Japan, returned to the majors with the Marlins last season and turned in strong numbers at the plate and also excelled at the hot corner.

McGehee, 32, played in 160 games, hitting .287 with four homers. He was second in the NL with singles and fourth in hits. His .319 average with runners in scoring position led the Marlins and ranked 14th in the NL (min. 100 plate appearances w/RISP).

The award was voted on by big-league players.

McGehee is the first Marlins player to receive Comeback honors from the Sporting News. Marlins pitcher Alex Fernandez was the 1999 NL Comeback Player in the Players' Choice Awards.

Here are the voting results for TSN's NL Comeback award:

Ed Lucas, the articulate, Dartmouth-educated utility infielder for the Marlins, was claimed off waivers on Friday by the Texas Rangers.

Lucas toiled for years in the minors before finally receiving a shot with the Marlins in 2013.

The 32-year-old infielder hit .251 last season with one homer. He started the season on the disabed list with a broken left hand after being struck by a pitch in the Marlins' final Grapefruit League game against the Cardinals.

In his two seasons with the Marilns, Lucas hit .255 with five homers.

Josh Beckett, who turned in an epic pitching performance for the Marlins when they knocked off the New York Yankees in the 2003 World Series, said he intends to retire.

Beckett, now with the Dodgers, has a torn labrum in his left hip that will require surgery. Beckett told MLB.com that at this stage of his career, he doesn't want to go through the rehab that would be needed to get him back on the mound. 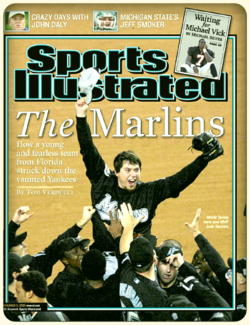 Beckett, 34, was selected by the Marlins with the second overall pick in the 1999 draft and helped lead the team to its second World Series title four years later. Manager Jack McKeon sent Beckett to the mound at Yankee Stadium for Game 6 of the '03 Series on short rest, and the gamble paid off when the young pitcher hurled a complete-game shutout to clinch the title. Beckett was named Series MVP.

He was also instrumental in the Marlins win over the Chicago Cubs in Game 6 of the '03 NLCS -- the "Steve Bartman game" -- when he turned in four strong innings out of the bullpen, holding the Cubs at bay as the Marlins mounted their dramatic comeback.

Beckett pitched two more seasons with the Marlins before being traded with Mike Lowell to the Boston Red Sox in 2005 for Hanley Ramirez and Anibal Sanchez. Beckett had his ups and downs in Boston, where he won another Series ring and also posted his only 20-win season in 2007. He was later traded to the Dodgers, and this year pitched his first major league no-hitter before suffering yet another injury.

Posted by Clark Spencer at 8:29 AM | Permalink | Comments