SAN DIEGO -- Another Marlins trade with the Detroit Tigers can now be written off as a complete bust.

Catcher Rob Brantly, who was obtained from Detroit in the Anibal Sanchez/Omar Infante trade-deadline deal in 2012, was claimed off waivers on Monday by the Chicago White Sox. 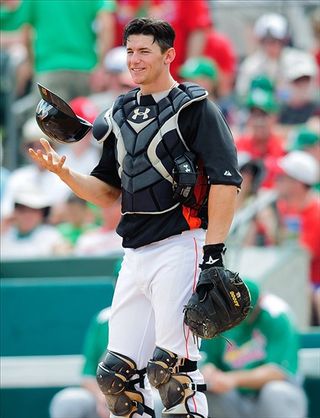 That means all three players the Marlins acquired in that Detroit deal are no longer in the organization. Pitcher Jacob Turner was dealt to the Cubs late last season while pitcher Brian Flynn was shipped to Kansas City in the trade for reliever Aaron Crow last month. While it doesn't rank with the Miguel Cabrera trade disaster with Detroit, the 2012 deal with the Tigers represents yet another mistake for the Marlins in their Motor City dealings.

When the Marlins acquired Brantly, they were counting on him to become their catcher of the future. But it soon became apparent that wasn't going to be the case. While Brantly was the Marlins' opening day catcher in 2013, he hit only .211 and struggled defensively. He spent all of last season at Triple A New Orleans after the Marlins went out and signed Jarrod Saltalamacchia to a 3-year deal.

And with the budding emergence of catcher J.T. Realmuto, Brantly became expendable.

With Monday's move, the Marlins created an opening on the 40-man roster in case they decide to take a player in Thursday's Rule 5 Draft.