When the slugger steps into a batting cage later today to face live pitching for the first time since he was struck down by a Mike Fiers pitch in September, he'll be wearing this custom-made helmet and face guard to prevent a repeat occurrence: 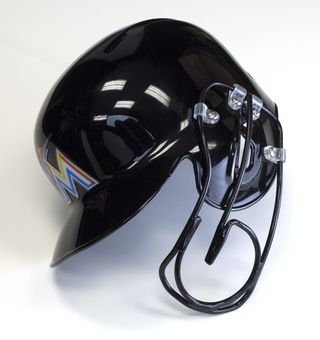 The Rawlings helmet was re-configured for Stanton with a face guard by Schutt Sports, which is better known for making football helmets that are used throughout the NFL and college.

Unlike some other helmet extensions, which are solid in nature, Stanton is going with a carbon steel frame that can withstand 100-mph pitches.

Stanton flew up to the company's Litchfield, Ill., facility Monday on owner Jeffrey Loria's private jet to see the helmet for the first time and put it on for size.

"We were so impressed with him when he came up earlier this week," said Glenn Beckmann, director of marketing and communications for Schutt. "He was genuinely interested in working this whole batter's guard out."

Stanton wanted something that would not only protect the side of his face, but a helmet that would allow him open sight lines and freedom of movement.

"He gave us the final instructions on what he wanted, and we had a working prototype to go this morning," Beckmann said Wednesday. "He was intensely engaged in every step of the development process."

The one-of-a-kind helmet and guard comes with an approximate price tag of about $500 to $1,000 -- small change for a slugger who will be making $325 million over the coming 13 years.

Beckmann said Stanton paid close attention to the details, and modeled the helmet to make sure it fit his needs. When the company fired fastballs at the guard sans the slugger to prove to Stanton that it did the job, the slugger's "face was pressed to the glass."

"He would stand there and mimic his batting stance and look to see if his site-line was obstructed at all," Beckmann said. "He held a baseball up to the gaps (in the guard) to make sure the ball would not come through."

For one final touch, Stanton had the company incorporate his initial -- "G" -- into the guard. (Look closely and you'll notice the initial for yourself.)

"We basically took Giancarlo's idea and we just translated it into wire," Beckmann said. "Then we just started creating different shapes and configurations. We got the look and then he decided he wanted to add a little style to it, and he put his G on the front of it, and we’re like 'That’s rocking.'" 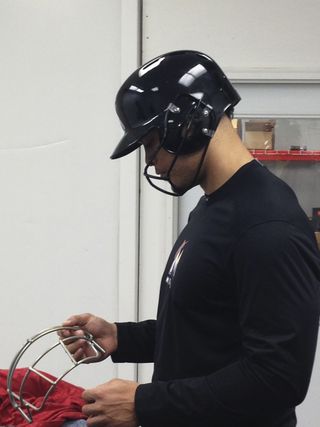