Stanton eyes return from DL in 'about a week and a half'; Yelich activated from DL 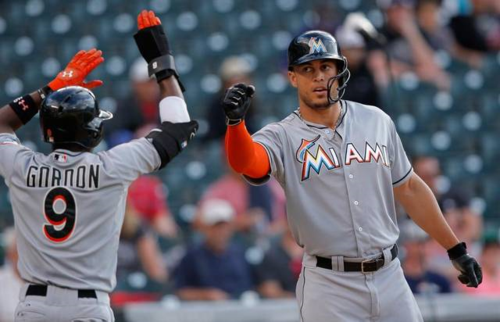 Giancarlo Stanton could be back in the Marlins lineup when they open their next homestand against the division-leading New York Mets a week from this Friday.

The All-Star slugger, who underwent surgery to repair a left wrist fracture on June 28, said Tuesday he's feeling better and is "about a week and a half [away]" from a return.

Stanton, who was leading baseball with 27 homers and 65 RBI when he injured his wrist swinging a bat, doesn't expect to play in any minor league rehab games when he's finally cleared. He said he can get his timing back in the batting cages.

"I don't know how much time I have to do that [a minor league rehab stint] to be honest, for their schedule and for ours," said Stanton, who was initially expected to be back four to six weeks after surgery but has been delayed by pain in the wrist. "Hopefully, my timing will be there and we'll go from there."

The Marlins starting outfield of Stanton, center fielder Marcell Ozuna, and Gold Glove-winning left fielder Christian Yelich, tabbed the best in baseball by ESPN this winter, has only made 44 starts together in 2015.

"It will be a welcome addition to have him back in the lineup," manager Dan Jennings said of Stanton. "I know he's been progressing in a good way. I had a good visit with him Monday. He told me he's feeling stronger and doesn't feel it when he turns his wrist. So that's a good sign. If we can get these guys together and have a month of health, maybe we can be a spoiler in some ways."

Yelich came off the disabled list Tuesday after the Marlins sent their seventh starting pitcher this season, rookie Kendry Flores, to the disabled list. Left-hander Chris Narveson will become the 13th different Marlins pitcher to start a game on Wednesday.

Jennings said Flores still has to have his an MRI on his throwing shoulder.

"Hopefully that tendonitis he felt will dissipate and he can be back because it's obvious we're going to need that pitching depth going down the stretch," Jennings said.

Staff ace Jose Fernandez, who has been on the disabled list since Aug. 8 with a right biceps strain, will throw a bullpen session Thursday at Marlins Park. Fernandez may simply need to throw in a simulated game before he's cleared to return from the disabled list.

"There's a case with him we could run him to Jupiter and get him in," Jennings said. "But he may accomplish the same thing in a sim game. Just depends on when he's ready to amp it that way. But he feels great right now, real good."

> The Marlins are also expecting right-hander Jarred Cosart, who has made just eight big league starts this season while battling vertigo, to be back soon. He's scheduled to throw 65 to 70 pitches for Single A Jupiter on Thursday.