JUPITER -- With a week remaining to Opening Day, the Marlins on Tuesday trimmed four players from the roster to bring the number left in camp to 35.

Outfielder Justin Maxwell and infielder Don Kelly were granted their releases while right-handed pitchers Jose Urena and Nefi Ogando were optioned to Triple A New Orleans.

Though Maxwell and Kelly are now free to explore the market, there's a chance both could return to the organization if they can't find any takers.

"(President of baseball operations) Mike Hill left that possibility open, that if I can't find a job, they'd be more than happy to come back and wear a Marlins uniform," Maxwell said.

The same is true of Kelly, who spent almost all of last season on the disabled list and later underwent Tommy John surgery on his throwing arm.

The most intriguing names remaining in camp are outfielder Cole Gillespie and pitcher Brad Hand. Gillespie is out of minor-league options and, with no room on the roster for an outfielder, would have to clear waivers -- an unlikely event -- if the Marlins decide not to keep him. Likewise, Hand is also out of options. The Marlins would prefer not to lose either. Those decision must be made within the coming days.

Posted by Clark Spencer at 9:17 AM | Permalink | Comments

JUPITER -- It took him most of spring training, but Giancarlo Stanton finally connected on his first home run, a solo shot to center off the Cardinals' Trevor Rosenthal.

"It's good to get on top of one," Stanton said.

Not only was it Stanton's first homer this spring, it was his first since June of last season -- before he broke the hamate bone in his left hand.

It's not like Stanton has had a ton of chances in spring training. He missed some time with a sore knee, and his at bat in the seventh inning was only his 17th this spring.

"I'm roughly where I'm at," he said of his progress so far this spring. "I don't necessarily need a certain amount of at bats, rather than a feel in spring."

Stanton has been experimenting with an Axe bat, which has a tapered handle to relieve pressure on his hand. But he's also continuing to use his Marcucci bat, which is what he used Wednesday when he hit the homer. 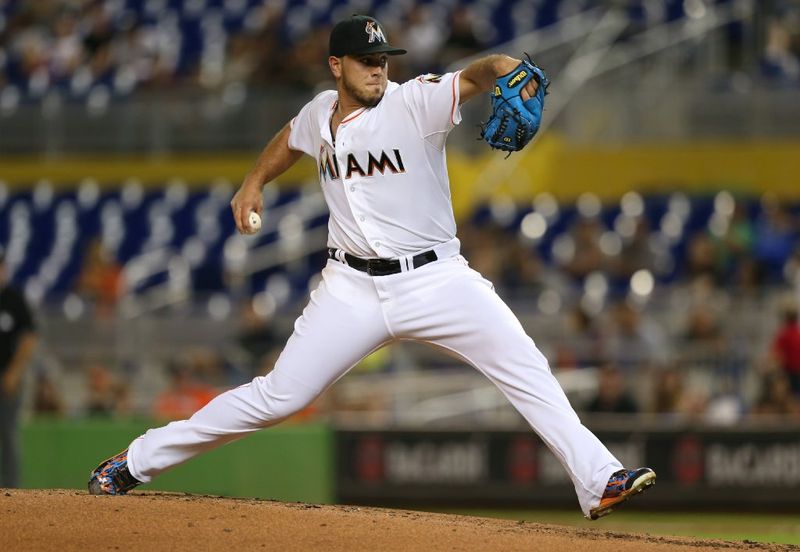 Jose Fernandez began his Tuesday by talking to a throng of reporters about the Rays’ exhibition game in his native Cuba.

Fernandez’s third start of the spring began a combined one-hitter by him, Edwin Jackson, Craig Breslow and A.J. Ramos.

Fernandez walked one batter in the first inning in which he threw 19 pitches. He became increasingly efficient as the outing went on, retiring the final 13 batters he faced and striking out four.

“We’re just following the game plan and [catcher Jeff] Mathis called the game perfect,” Fernandez said. “The result was there so I’m pretty happy. I feel like I accomplished something today.”

Fernandez threw 60 pitches, 41 of which were strikes and only threw seven pitches for balls from the second inning on.

It was a sharper outing for Fernandez in terms of results than his previous spring start March 17 against the Mets when he gave up six earned runs on five hits and two walks in 3 2/3 innings.

“Last start the result wasn’t there, but I felt the location was good and the pitches were good. Today I was trying to keep the same level and not to get too up or down too much.”

Fernandez, who is slated to make his first start of the regular season April 6 at Marlins Park where he is 17-0 for his career, has been working on improving his changeup’s effectiveness this spring.

“It’s a pitch that will help me a lot and the team a lot,” Fernandez said. “It keeps hitters guessing a little more. I didn’t use it more in high school and in the minor leagues I didn’t use it much. It’s something that takes away from breaking balls and lets me mix more and take care of my arm and body more.” 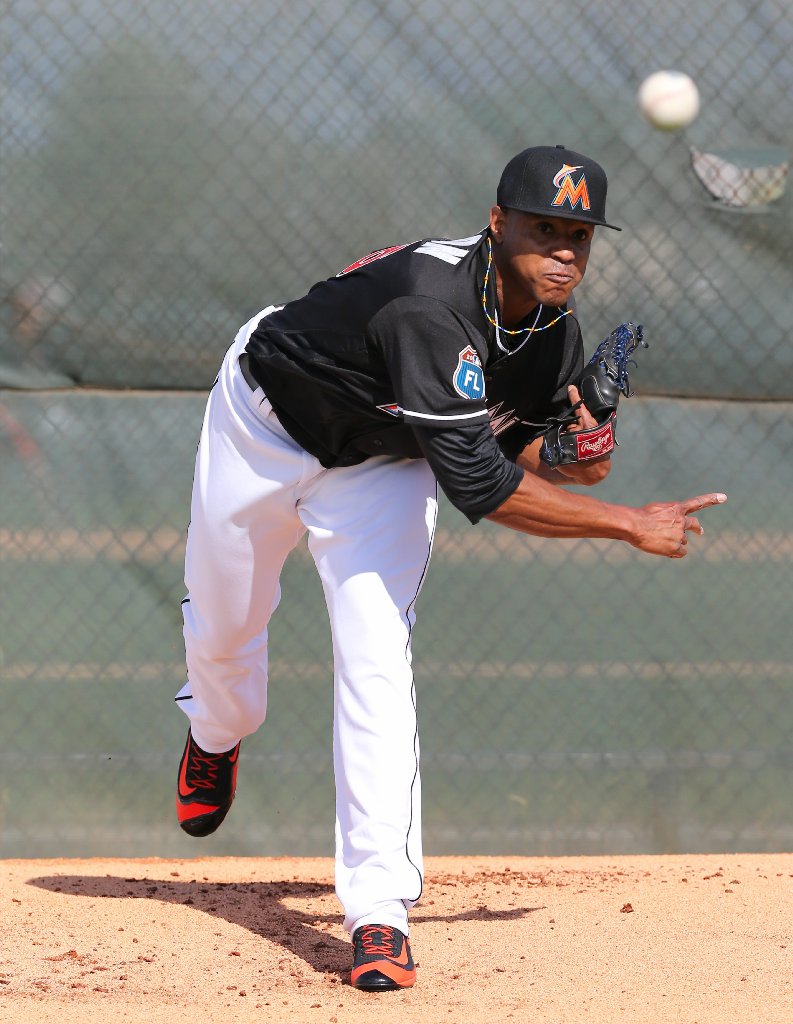 Edwin Jackson looked sharper as well in two hitless innings of his own.

Jackson, who has thrown mostly on the back fields of Roger Dean Stadium this spring while working closely with new Marlins pitching coaches Juan Nieves and Jim Benedict, struck out two batters as he faced the minimum amount of batters.

“Edwin’s messing around with a cutter now and it looks like it will be a good pitch for him,” Marlins manager Don Mattingly said. “Sometimes you throw the ball good and you don’t get a good result, but the ball was coming out good and hitters were taking swings that were not very good, so that was good to see.”

Marlins send nine to minors including Barraclough, Nicolino and Ellington

The Marlins optioned nine players to the minors Tuesday including starter Justin Nicolino and relievers Kyle Barraclough and Brian Ellington.

The three pitchers, along with catcher Tomas Telis, were optioned to Triple-A New Orleans.

Barraclough and Ellington, both hard-throwing righties, were being considered as potential middle relief or set-up options in the wake of reliever Carter Capps’ season-ending injury.

In 2015, Barraclough,went 2-1 with a 2.59 ERA in 25 relief appearances last season, allowed eight runs (seven earned) in 24 1/3 innings and posted 30 strikeouts and 18 walks. This spring, Barraclough made six appearances and went 4 2/3 innings. He didn’t allow a run in his first four outings, but gave up a combined three in his last two and walked three batters, striking out only two.

Ellington had similar numbers in 2015, going 2-1 with a 2.88 ERA in 23 appearances and 25 innings. He allowed 10 runs (eight earned), struck out 18 and walked 13. This spring, he made five appearances against major league teams, and went four innings, allowing six runs (four earned), six walks and had four strikeouts.

"Those two are guys we feel like through the course of this summer will be big for us," Mattingly said. "Both of those guys’ fastball command was an issue in spring training. In terms of power stuff, Barraclough probably has the best slider coming out of our bullpen. But you have to get to that pitch. As a power arm, you want him to get ahead in the counts and puts the hitter on defense."

Nicolino had been competing for a spot in the team’s rotation to start the season. Last year, he also began the year at Triple-A before being called up after injuries to starters.

Nicolino made 12 starts at the big-league level in 2015 and went 5-4 with a 4.01 ERA in 74 innings pitched, making two starts in June following an injury to Tom Koehler. He was then sent back down to the minors and recalled in August following an injury to Jose Fernandez and pitched in the rotation for the remainder of the season.

With a mostly pitch to contact style so far in his career, Nicolino had only 23 strikeouts and 20 walks. This spring, he made two starts and three appearances overall this spring, and went 0-1 with a 2.16 ERA in 8 1/3 innings with two strikeouts and no walks. He retired 22 of the 31 batters he faced either by ground outs (12) or fly ball outs (10).

"For us with Nicolino it was a matter of getting him ready," Mattingly said. "We know we’re going to need him during the course of the season. Nico is definitely a starting pitcher and a guy we think will pitch in the majors for a long time."

Adam Conley strengthening case to be in starting rotation 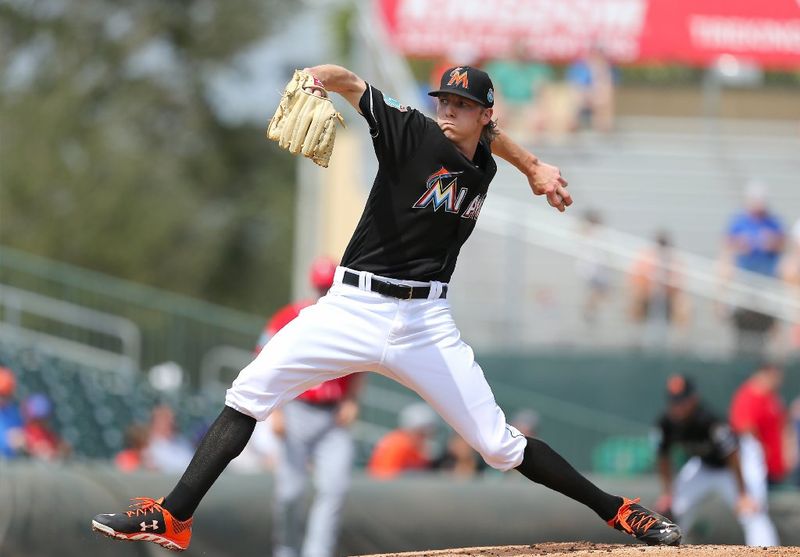 The weather was about as nasty as it could be Saturday afternoon around 2 p.m. at Roger Dean Stadium.

Adam Conley was so zoned in, it might as well have been a sunny day.

In a game that was halted and later cancelled after two scoreless innings due to a severe thunderstorm, Conley struck out all six Tigers batters he faced as he continued to increase his chances of landing one of the team’s available spots in the starting pitching rotation.

“Adam was very good again and that’s what we’ve been seeing all spring,” Marlins manager Don Mattingly said. “He’s been on the attack pitching off his fastball with no hesitation in what he’s trying to do and that shows real confidence.

“For a young guy that had a good year last year and maybe the breakthrough that he needed, that confidence is carrying over to this season so far.”

Conley was remarkably efficient, throwing 29 pitches with 22 for strikes. Five of his strikeouts were swinging.

“Basically all spring there’s been a progression beginning with establishing the fastball for strikes early, throwing it for strikes late, getting ahead and expanding the zone and progressing speeds with the changeup,” Conley said. “I pitched to our minor-league affiliate team last time I threw. In this case, it was an AL team that I’m not going to see a lot. So it gave me the freedom to throw my best stuff all day and make guys miss.”

The Marlins were hoping for potentially a four-inning outing closer to the 70 pitch mark. Conley said he’ll likely target a start of about five innings to compensate for Saturday.

Conley handled the unpredictable situation very effectively as the weather began to deteriorate even before he threw his first pitch.

“I was trying to stay in the present moment,” said Conley, who was born in Redmond, Washington and pitched at Washington State University. “I’m no stranger to the rain. More or less my entire 2013 season in the minors, every game I pitched had some sort of rain delay or was affected by rain. I grew up in the northwest and played baseball with rain all the time. It’s just something that you just roll with it.”

Conley, 25, entered the spring in competition for likely the fifth spot in the rotation with Edwin Jackson, David Phelps, Jose Urena, Kendry Flores.

Conley’s dominance and consistency have made him the favorite to join a rotation likely shaping up to consist of Jose Fernandez, Wei-Yin Chen, Tom Koehler, Jarred Cosart and him in an order to be determined.

Mattingly described Conley as “being on a mission” the entire spring so far.

“I've been on [a mission] for a long time,” Conley said. “Obviously, the results were great today. But for me, the pursuit is not to strike out the first six guys in the game.

“It’s the never-ending process of no matter how many pitches I throw or how many swings I see I will always learn from it.”