Here's what Dee Gordon can and cannot do while suspended

According to Major League Baseball, here's what Dee Gordon can and cannot do while serving his 80-day suspension for a violation of the league's drug policy:

4) Cannot be elected or selected to the All-Star Game

7) Can work out with the club 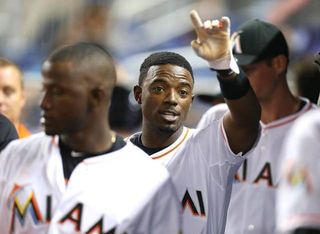 "Though I did not do so knowingly, I have been informed that test results showed I ingested something that contained prohibited substances.  The hardest part about this is feeling that I have let down my teammates, the organization, and the fans.  I have been careful to avoid products that could contain something banned by MLB and the 20+ tests that I have taken and passed throughout my career prove this.  I made a mistake and I accept the consequences."

Gordon, 28, tested positive for the banned substances exogenous testosterone and clostebol. He signed a five-year, $50 million extension in January after winning the National League batting title, winning a Gold Glove and leading the league in steals.

Gordon's suspension will cost him about half of his $3.3 million salary for this season and also keeps him out of the postseason should the Marlins get there.

Posted by Manny Navarro at 9:27 AM | Permalink | Comments

Few things surprise me anymore. But Dee Gordon getting hit with an 80-game suspension for performance enhancing drugs?

When it comes to shockers, this one has to rank at or near the top of the list. Last year's batting champion, a gnat of a second baseman, was hit with a big-time suspension by the league for PEDS.

This is an obvious blow to the Marlins.

But Dee Gordon? Who would have thunk it?

It might help explain why he's off to such a slow start at the plate, and why the Gold Glove second baseman has looked out of sorts with the glove. He flubbed another ground ball tonight in Los Angeles, where the Marlins polished off a four-game sweep over the Dodgers.

But whatever cheer came from that series sweep for the Marlins was quickly muffled with the league's announcement that Gordon had been caught breaking the rules.

Gordon signed a five-year deal with the Marlins over the winter, and owner Jeffrey Loria presented him with a gigantic neck pendant last week in Miami for his achievements last season.

But Gordon broke the rules, and he and the Marlins are left with the broken pieces.

Posted by Clark Spencer at 1:50 AM | Permalink | Comments

LOS ANGELES -- The same troubling pitching signs that caused Jarred Cosart to spend most of last season in the minors prompted his return.

The Marlins on Tuesday optioned Cosart to Triple A New Orleans.

Cosart has battled wildness while going 0-1 with a 7.98 ERA in his three starts. He's walked 15 with two wild pitches in 14 2/3 innings, and issued six walks in each of his past two starts, including Friday's outing in San Francisco.

Last season, Cosart's issues were attributed to vertigo. But that problem was corrected, supposedly, and there's been no indication that he's dealing with it once again.

The Marlins are expected to call up Justin Nicolino from New Orleans in time to make the start Wednesday against the Dodgers.

As for Cosart's roster spot, the Marlins reinstated third baseman Martin Prado from the paternity list. The Marlins also announced that left-hander Chris Narveson, who had been designated for assignment, was outrighted to New Orleans.

Mattingly after ejection: Marlins getting robbed

Don Mattingly wasted little time in receiving his first ejection as Marlins manager, tossed in Friday's fourth inning only 15 games into his short tenure with Miami.

But here's what made it interesting: Mattingly complained that the Marlins are getting robbed because they're, well, the Marlins.

"It's just 15 games now, and I know these guys don't mean to, but it just feels like any kind of close call or big situation, there's never a call that goes the Marlins' way," Mattingly said after being tossed by home plate umpire Brian Gorman for arguing balls and strikes.

“I’ve seen it at home and I’ve seen it on the road and I saw it tonight,” Mattingly said. “We see Pagan had a 1-2 or 2-2 pitch is right there and he doesn’t call it. Then, we see [during] Dietrich’s at-bat which was big because we had first and second and one out and he called the same pitch for a strike.

“I think my frustration is more over just what’s going on with the Marlins. I know the umpires don’t do that on purpose, but it just seems like subconsciously that it’s ok to screw the Marlins.”

It was the 21st ejection of Mattingly's managerial career.

Here's the breakdown of Marlins' managerial ejections, courtesy of Retrosheet.org

Bling by Bling: Jeffrey Loria Through the Years

On Tuesday, Loria presented Gordon with a jeweled-out neck pendant for winning the batting and stolen base titles last season. We are not talking small. The disc-shaped pendant is so large that Marlins manager Don Mattingly was heard to say: "Is that a chain or a belt buckle?" Gordon was almost at a loss for words.

Check out this bad boy: 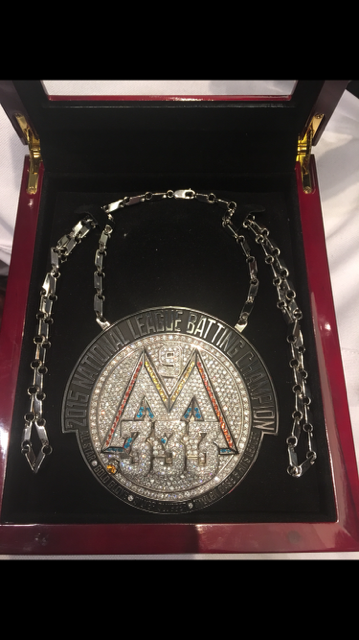 Gordon isn't the first Marlin to find himself in possession of some big bling, courtesy of the Marlins' owner. After Ramirez won the batting title in 2009, Loria gave him a diamond-studded pendant:

But it was in 2003 when Loria went all out, ordering World Series rings that were the size of small golf balls, dwarfing all other championship rings before or since: 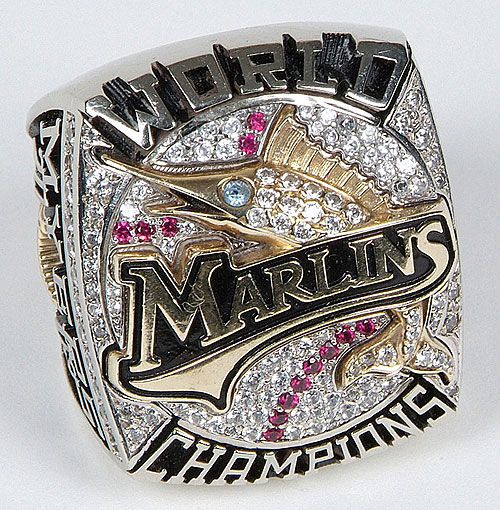 Posted by Clark Spencer at 10:32 AM | Permalink | Comments

Add it all up, and the Marlins played arguably their most complete game in recent memory when they squeaked out a close win over the Mets on Tuesday.

"That game doesn't get won last year," Giancarlo Stanton said. "I feel like there was a lot of games last year where we just waited to lose rather than try to win. Something went wrong."

That wasn't the case Tuesday.

On a bitter cold night at Citi Field, a night when the Mets' Noah Syndergaard was dealing, the Marlins somehow prevailed in a 2-1 victory. It wasn't one Marlins player who made the difference. It was darn near every one of the 16 whose name showed up in the box score.

Take Jose Fernandez. His first two innings were a struggle. He gave up a run in the first and had totaled 51 pitches in the first two innings. But he worked out of a bases-loaded jam in the second and retired the final 10 batters he faced -- striking out the last four -- to keep the Marlins in the game.

"It was hard to get a grip on the ball," Fernandez said of the frigid conditions. ""I was trying to make a good pitch and trying to keep the boys in the game. The weather was rough, but you've got to battle."

Here are some of the other highlights:

-- After Justin Bour kept the fourth inning alive by beating the shift, grounding a single through the vacated left side of the infield, Dietrich singled off Syndergaard to drive in the Marlins' first run and tie the score.

-- In the eighth, when Jim Henderson took over for Syndergaard, Gordon worked a Marlins record 16-pitch at bat in which he ended it with a leadoff single. Gordon stole second. One out later, Henderson walked Christian Yelich and Stanton, loading the bases.

-- Prado, who didn't start Tuesday, was "running and jumping up and down" in the clubhouse, trying to get warm. Prado knew he would go in to pinch-hit for Bour if the Mets brought in a lefty, which they did when Terry Collins called on Jerry Blevins. Prado lofted a fly ball to right that was deep enough to score Gordon from third with the go-ahead run.

-- David Phelps came out of the bullpen for the Marlins and delivered two scoreless innings.

-- A.J. Ramos closed out the victory in the ninth.

"It wasn't one through nine," Stanton said of the individual contributions. "It was one through 15 or 16. That's huge. That's what it's going to need to be."

NEW YORK -- I'm not really sure why this is being portrayed as some great pronouncement, but Barry Bonds was quoted as saying he didn't think Alex Rodriguez would break his home record before the end of the 2017 season.

"No, not in two years," Bonds told the New York Daily News. (Here's the link: http://www.nydailynews.com/sports/baseball/yankees/barry-bonds-alex-rodriguez-won-catch-home-run-record-article-1.2596993)

Let me take this a step further by saying I strongly doubt A-Rod will break the record even if he plays beyond 2017, the year his contract expires. And that's a big if.

But how about an entire team of Little League players?

In a Major League Baseball promotional ad, Stanton takes one end of the rope while a team of youngsters from West Palm Beach grab hold of the other in a game of tug of war.

The ad doesn't show which side ends up winning. But it appears the Little Leaguers are gaining the advantage -- albeit with Stanton holding on to the rope with one hand.