NEW YORK -- David Phelps was supposed to be on the mound tonight at Citi Field. Instead, he landed on the 15-day disabled list with a left oblique strain. The Marlins called up right-hander Jake Esch to take Phelps' place in what will mark his major league debut.

Phelps said he sustained the injury while taking batting practice on Tuesday.

"I actually did it in the batting cage yesterday," Phelps said. "First swing. I just felt something, shut it down. My initial reaction and our initial thought was I would maybe miss one start."

The Marlins waited to see how Phelps felt when he woke up this morning before making a decision.

"Woke up, it was still stiff," Phelps said. "So they decided to put me on the DL."

Phelps said his arm his fine and that he expects to resume throwing in about four days. If all goes well, he'll miss no more than two starts.

"The silver lining would have been if it had happened on Sept. 1 (when rosters expand) and you wouldn't have had to worry about a DL stint," Phelps said. "But it's Aug. 31, so we've got to make a roster move. My arm's perfectly healthy."

Esch is a former 11th-round pick for the Marlins and has gone 12-10 with a 4.31 ERA this season for Double A Jacksonville and Triple A New Orleans.

The Marlins, who avoided the injury bug the first half of the season, haven't been as fortunate the second half. Having already lost starting pitcher Wei-Yin Chen and first baseman Justin Bour to injuries, the Marlins were dealt another blow on Tuesday when closer A.J. Ramos was placed on the 15-day disabled list with a fractured finger on his pitching hand.

Suddenly, a bullpen that looked capable all not long ago appears vulnerable. Not only is Ramos out, but David Phelps has moved into a starting role to shore up the rotation. The Marlins have a ninth-inning fallback in Fernando Rodney. But the sequence of late-inning set-up relievers becomes more suspect.

It's uncertain how much time Ramos is likely to miss. His DL assignment is retroactive to Saturday, the day he last pitched. But a broken finger is obviously not a good thing. Ramos jammed his right hand during the previous home stand and tried pitching through it -- to mixed results. Though he never offered it as an excuse, it was clearly a factor in his Wrigley Field meltdown last week.

The Marlins on Tuesday made a couple of moves to a bullpen that was taxed during Monday's 14-inning marathon. Hunter Cervenka, who was acquired from the Braves over the weekend, was optioned to Triple A New Orleans after making only two relief appearances. The Marlins recalled right-handed rookie Austin Brice from Double A Jacksonville and selected the contract of veteran left-hander Chris Narveson, who was on the club at the start of the season.

Did Stanton really hit longest HR in Coors Field history? You be the judge

DENVER -- No matter how you measure it, Giancarlo Stanton's home run Saturday off Chad Bettis was a BOMB.

The ball was crushed, landing about two-thirds of the way up in the left-center field bleachers. Within minutes, MLB.com's Statcast, which uses sophisticated equipment to measure distances, pegged it at 504 feet. If that figure is accurate -- and there's no reason to believe that it isn't -- it would make it the longest home run ever hit at Coors, surpassing Mike Piazza's 496-foot shot here in 1997 and Stanton's own 494-footer in 2012.

But wait a second. Take a look at the video evidence. Was Stanton's home run REALLY longer than Piazza's? Or even his own?

Now take a look at Piazza's, which landed on the concourse in center:

The equipment used to measure home run distances was not nearly as sophisticated then as it is now, so who knows whether Piazza's 496-foot shot was truly a 496-footer, or whether it was even longer.

But is sure doesn't look like Stanton hit the longest home run in Coors Field history last night.

Posted by Clark Spencer at 11:00 AM | Permalink | Comments

DENVER -- It wasn't a sleepy Saturday for the Marlins, who pulled off another deal to bolster their bullpen for a postseason push.

Cervenka's numbers have been impressive, especially against lefty hitters. In 50 appearances out of the bullpen for the Braves, the 26-year-old rookie has gone 1-0 with a 3.18 ERA. Left-handed batters have hit just .145 against him. He's struck out 35 batters in 34 2/3 innings for Atlanta.

The Marlins are giving up a speedster in Seymour (36 stolen bases for Single A Greensboro) and a lefty minor-league arm in Mader (7-6, 3.50 for Single A Jupiter). Mader was the Marlins' third-round pick in 2014 while Seymour was taken in the seventh round that same year.

Cervenka gives manager Don Mattingly a much-needed lefty specialist he can employ in late-inning matchup situations. The Marlins' incumbent left-hander, Mike Dunn, has never been significantly more effective against left-handers than he was facing right-handed swingers.

No word yet on who the Marlins will take off their 25-man roster to make room for Cervenka.

DENVER -- When Andrew Cashner says he literally buried his beard after shaving it off to conform to the Marlins' ban on facial hair, believe him. Cashner's father worked in the mortuary business and he used to help him dig the graves and mow the cemetery grass.

"It's a sore subject still," Cashner said of having to shave his bushy beard after the Padres traded him to the Marlins. "I don't like it. But what can you do? I hate shaving. I think my beard is a part of me as a person and who I am." 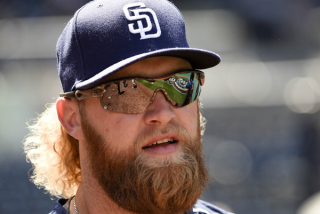 Cashner isn't the only Marlin who doesn't care for the team's facial hair policy, which was restored before the season after the rule was relaxed for a few years. Players have complained about it privately, but have no choice in the matter. A rule is a rule.

Reliever Fernando Rodney was also forced to shave off his beard when he came over to the Marlins in an earlier trade with the Padres. Cashner said he was informed about the rule when owner Jeffrey Loria and president of baseball operations Michael Hill spoke to him by phone after the trade was made with San Diego.

"When I talked to Michael Hill and Jeff Loria, they kind of told me I needed to shave it," Cashner said. "I hate it. But that's the rule here and that's what you've got to do."

Cashner said shaving off a distinctive beard he wore for years wasn't pleasant.

"I shaved it the next day," Cashner said. "It took a while. It's probably one of the saddest days I've ever had. It stinks, but what are you going to do?"

Cashner didn't just wash the stubble down the sink.

"That'll be the nice thing about free agency, kind of choose a place that (allows facial hair)," Cashner said. "It's a big deal to me."

Major League Baseball is taking a look at the Colin Rea trade, which went up in flames when the pitcher suffered a season-ending arm injury in his very first start with the Marlins.

According to ESPN's Buster Olney, the league is looking into whether the Padres failed to disclose an existing injury with Rea before trading him to the Marlins, along with Cashner. Olney's sources told him Rea informed the Marlins he was receiving treatment on the arm before the Padres traded him. After Rea's injury came to full light, the Marlins traded him back to the Padres for minor-league prospect Luis Castillo.

Posted by Clark Spencer at 11:46 AM | Permalink | Comments