Marlins being cautious with Uggla

One thing Dan Uggla has done throughout his career with the Marlins aside from hit a lot of home runs (150) and drive in nearly 100 runs a season is stay healthy.

Of the 774 games he's been available to play in since 2006, he's only missed a total of 32 games. Tuesday, though, that number will increase to 33 as he sits out for only the second time this season as he continues to rest a tight right groin. And with a day off Thursday, manager Edwin Rodriguez said it's likely he'll tell Uggla to also sit and rest Wednesday.

"I don't like icing. I don't like missing games. And I don't like being out of the lineup," said Uggla, who is hitting .286 and leads the Marlins with 29 homers and 83 RBI this season. "But I don't want to make it any worse. You have to be careful with tweaks."

> There is still no official word from the Marlins on catcher John Baker's status for the remainder of the season. Rodriguez said Baker was meeting with a doctor Monday to determine if he'd need season-ending surgery on strained right flexor muscle on his throwing arm or if he's going to return to rehab in the coming days. Word now is Baker could be meeting with Dr. James Andrews Thursday for a final opinion.

As for now, Rodriguez said he's planning as if Baker won't be back.  "I have to think that way," Rodriguez said. "If he shows up tomorrow and says I'll be out there in the weekend, that would be great news. But I have to plan for the worst and hope for the best."

> Left-hander Sean West, on the disabled list with right knee inflammation since August 15, threw his first bullpen session Monday and participated in his first pitcher fielding practice on Tuesday. "I feel a lot better, do not feel any discomfort at all," West said. "But I've also been real cautious, riding the bike instead of running. We'll have to see how I feel tomorrow I do some fielding."

CALLUPS MIGHT NOT ARRIVE RIGHT AWAY: Wednesday is the first day major league teams can begin expanding their rosters. But as it stands, it may be a little while before the Marlins bring anybody up.

With the Jacksonville Suns set to participate in the Southern League Double A playoffs Sept. 9 and 10, those players will likely be the last to come up according to Rodriguez. The Triple A New Orleans Zephyrs, who just clinched their consecutive losing season, don't finish their season until Monday.

"We've been shuffling names, but we haven't made any decisions yet," said Rodriguez, who said he's heard between eight and nine players being discussed as potential callups. "Initially, I would say three or four could be up by Friday. But Jacksonville is going into the playoffs. Whoever is coming up from Jacksonville would usually be later."

Posted by Manny Navarro at 5:31 PM in Dan Uggla, The Lineup | Permalink | Comments

Fights happen all the time between brothers. And apparently more often than we know in the Marlins clubhouse. 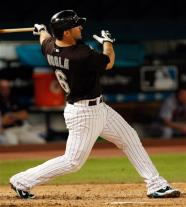 Wednesday's clubhouse spat between All-Star shortstop Hanley Ramirez and second baseman Dan Uggla became the juiciest Fish story of the year when the two decided to extend jabs in front of a small group of reporters. Uggla reportedly called Ramirez out for not playing through the pain of his tight left hamstring, an injury Ramirez said made him feel "at 10 percent."

The Marlins quickly closed shop after the spat and we don't know whether or not Ramirez and Uggla really hugged it out. But this is what Uggla had to say about it after the Marlins beat the Braves 8-7 in dramatic fashion.

"Whether that fueled emotion for tonight, who knows. It happened. We’re a family. I love him like a brother. We got past it and moved on. Stuff like that happens and emotions are going to fly sometimes. I’m glad it happened. I’m glad its over with. I think we’re stronger, closer and tighter because of it."

The Marlins could certainly use something to light a fire under their butts. With 29 games left, they are 69-64 and need to finish 21-8 to reach that magical 90 win mark, which could be what puts them into the playoffs. But are we to just believe Ramirez and Uggla really buried the hatchet? Are we to believe Ramirez, who was pretty steamed about what Uggla said, is going to be back out leading the charge soon?

Most of the night, TV cameras kept showing Ramirez at the end of the Marlins bench -- by himself. Cody Ross said he didn't notice that, then laughed about the way he dodged the question. Manager Fredi Gonzalez said the TV angle was simply focusing on Ramirez. Truth be told as the Marlins were celebrating with Wes Helms at home plate, Ramirez was in the background, not the foreground. When the clubhouse opened after the game, he was long gone.

"Me and Danny, Hermida fight constantly," Ross said. "It’s just the way we are. We’re together for seven straight months. We love each other, we’re going to fight for each other on the field. It doesn’t mean we go and hang out off the field or anything like that. But we’re in here and out on the field, we support each other 100 percent."

We'll have to see tomorrow I guess if Hanley still feels that way too.

Posted by Manny Navarro at 12:13 AM in Dan Uggla | Permalink | Comments

Fans will get to vote for the starting position players in next month’s All-Star Game up until 11:59 p.m. on July 2. But Friday, players will help select the backups at each position, plus eight pitchers (five starters and three relievers).

Second baseman Dan Uggla, a two-time All-Star, probably be won’t be joining Hanley Ramirez this year on the NL team in St. Louis. But Uggla hopes ace Josh Johnson, scheduled to pitch Friday against the Rays, finds a spot in the midsummer classic despite what Uggla said hasn’t been enough support or publicity from the organization.

“I don’t know what we’re waiting for,” Uggla said. “He’s one of the best pitchers in the game, if not the best. I’m waiting for these guys to do something to get his name out there – a little publicity, commercial, something.”

According to Marlins PR man Matt Roebuck players are allowed to vote for teammates and themselves.

Johnson is 7-1 this season with a 2.66 ERA, the sixth lowest among starters in the league. Last week, he gave up three hits and one earned run over seven innings in a 2-1 win over the Yankees and drew high praise from both Johnny Damon and Derek Jeter.

“He deserves an opportunity to pitch in the All-Star game,” manager Fredi Gonzalez said.

“There’s no hiding him anymore. Not that we were hiding him. Guys around the league are figuring out he’s one of the top guys in the league. Ross Gload was playing first base in Toronto two weeks ago when he pitched and guys were coming up saying ‘I’m glad this guy isn’t in our league.’ When guys from other leagues start paying a compliment, you know they’re good."

The Marlins have posters through out Land Shark Stadium that urge fans to vote Ramirez, who is currently the leading vote getter at shortstop. Fans can’t vote for pitchers.

Jorge Cantu had a rough month of May (.211, 1 HR, 15 RBI) in part because of the medication he was prescribed to deal with high cholesterol. It made him lethargic and at times dizzy on the field and at the plate.

Now, that he’s no longer taking the pills and had more than a week to have it cleaned out of his system, Cantu is not only feeling better, but he’s hitting better.

Tuesday night, he connected on his second walk-off hit of the season and third game-ending RBI. Cantu not only leads the Marlins in RBI (45), but is tied with Milwaukee’s Prince Fielder in clutch RBI (27).

While Cantu said his bat speed and timing are returning, he still isn’t completely 100 percent. “If I make mistakes from now on, it is on me, nothing else,” Cantu said. “I wish I felt 100 percent. I’m just not there yet.”

Outfielder Mike Stanton, one of baseball’s top prospects, will represent the Marlins in the All-Star Futures Game in St. Louis next month. The 19-year old Stanton will be the youngest player in the game.

Stanton was recently called up to Double A Jacksonville after hitting .294 with 12 homers and 39 RBI in 50 games for the Class A Jupiter. Although he struggled early in Double A, Stanton is now batting .246 with two homers and 8 RBI in his first 17 games with the Suns.

Maybe we make too much of milestones in baseball. Maybe we have to stop being such big geeks when it comes to numbers and statistics. Maybe we ought to try and be cool like Dan Uggla. 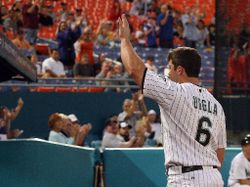 That's exactly what the Marlins All-Star second baseman was like after making a little baseball history Tuesday night against the Brewers. Fastest to 100 home runs among second baseman ever, Dan, how does it feel? “Uh, it’s pretty cool,” Uggla responded. “You know I hadn’t really thought about it until kind of somebody brought it to my attention yesterday. But yeah, it’s pretty cool.”

Just pretty cool to be on pace to hit more homers than guys like Jeff Kent and Ryne Sandberg?  “It means a lot,” Uggla said. “I really don’t even know what to say about it. I’m excited about it. I do it the fastest at my position. But it’s over and done with now.”

Maybe that's a good thing for the Marlins because they certainly need Uggla to keep doing more of what he's been up to lately than how he was performing for the first month and a half. Uggla started this season as the second-highest-paid Marlin at $5.35 million, but his batting average sagged at .182 as recently as May 15. He has picked it up over his past 16 games, hitting .276 (16 for 58) with six homers and 18 RBI -- his 2 for 4 effort with 3 RBI Tuesday included.

> Even he really wasn't pitching with the pressure on, Burke Badenhop deserves some props for what he did over five scoreless innings of relief Tuesday. Badenhop gave up just one hit, the longest relief performance of his career.

> Starter Anibal Sanchez didn't have a triumphant return -- just three innings and 71 pitches. But he made a key out when he needed to in the first with the bases loaded. When I looked up at the scoreboard Tuesday, I didn't see a whole lot of his pitches register in the 90s. But he said afterward his velocity was fine.

"I had a bad first inning. But it wasn’t bad really. The umpire made a couple [calls] there, they hit a lot of fouls," Sanchez said. "I felt better. I know I threw hard today. I just wanted to throw strikes and keep the ball in the zone. Today, it didn’t happen. But I was ok. I had better command today, more on the outside than the inside. It helped me get a lot of ground balls."

Welcome back Dan AKA Uggla is back

Dan Uggla returns to the lineup tonight in LA, taking the field for the first time since he left with a sprained left ankle June 28.

Uggla, who has 23 home runs, is back in the fifth spot in the lineup. Running is the only question, and Uggla said he felt "85" percent when it came to running.