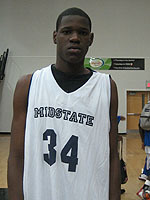 We were looking for five-star forward Latavious Williams around the GPP and on Thursday afternoon we found him.

LW -- who would be the highest rated hoops recruit to sign with FIU if he does so -- did not visit Georgetown today, but will go there next week. Here's what he had to say:

How was your visit to FIU?

LW: It was nice. Great weather and a beautiful campus. I like coach Thomas. I like the style of play he's going to have. Coach also has a lot of NBA connections. I didn't really know much about FIU, but it's looks like a good school and I really like coach Thomas. He was a fine point guard and he's a good dude.

What happened today that you didn't visit Georgetown?

LW: Coach Thompson wasn't in town so we postponed my visit until next Friday. After my visit at Georgetown next weekend, I will decide which school I will go to.

So what schools are you still considering playing for?

Is that the order that you like those schools?

LW: Nah (laughs). Every one of the schools has a chance to sign me.

So FIU has a 25 percent chance just like the other 3?

LW: FIU has a chance just like everybody else.

You seem to be undersized for a power forward. What are you weighing now?

Do you think you can handle power forward weighing 220?

LW: I really only played power forward in high school, because we didn't have any bigs on our team. I'm comfortable playing the 3 or the 4. I can score from the wing or down in the block.

There have been concerns with schools, because of your grades. How are your academics right now?

LW: I did real well on the ACT. I will be all right. I'm going to do real well in college.

How did you find your way to FIU?

LW: My AAU coach and coach Thomas have known each other for a long time. I enjoyed my visit there. We'll just have to wait and see where I go.

FIU hoops got another committment today from Highland (Ill.) JUCO forward Eric Frederick. EF is a 6-6 forward, who was committed to TCU where new FIU assistant Anthony Anderson used to coach at. Should EF sign with FIU he would play this coming season and would be a sophomore to start at FIU.

FIU_GPanther: Pete do you have any info on whether FIU is working on a TV contract with anyone, because I'm assuming there will be more games shown on TV specially Basketball and maybe even Football.

PP: There is nothing yet regarding TV. I'm sure one of the ESPNs will pick up some FIU hoops games.

Even if it's the Ocho.

FIUPIKE: Are we to assume that PG and Zeke would not recruit this kid unless they knew he qualifies here as well ?

PP: From what I've heard, LW will qualify, now it's a matter of him getting the grades at whatever school he goes to.

Gooch7: Pete I am so proud to have lost the baseball bet. I underestimated how good this team can actually be.

PP: The FIU baseball team has gotten much better, but it still has plenty of room for improvement to own  property in the Top 25 neighborhood. What has really hurt this season is losing those mid-week games and that has a lot to do with the depth of the pitching staff. TT has had only 1 full recruiting class. I agree with you that when TT gets a couple of more full classes in, FIU should be the class of the Sun 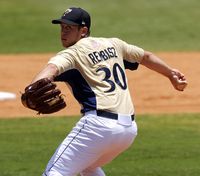 Belt and eventually a regular Top 25.

There is plenty of freshmen and new pitchers on the pitching staff with loads of talent (TT doesn't hand out scholies like dinner mints), but they need to trust their stuff and attack the hitters. They have to follow Scott Rembisz (left) and Tom Ebert's leads. Quick anecdote: there were several major league scouts at FIU's last home series last week vs. Arkansas State. A National League scout was raving about Rembisz. He told me "that kid is one strong, mentally tough kid on the mound". The scout added "Rembisz has got the [testicular fortitude] of a bull." He said another word not printable in this blog for testicular fortitude.