I'll get to how FIU did to UAB what the Blazers thought they would do to FIU in a moment. But here's my favorite defensive sequence of the game, the moment FIU's defense truly delivered crushed out UAB:

UAB was at the FIU 43. The Panthers' 24-13 lead seemed certain to be shrunk a little. The Blazers moved the ball on their previous possession for the first time in the second half. That drive should've ended with Jeremiah McKinnon's incredible one-armed interception, but he got called for pass interference, an amazing feat when it was a one-armed pick because McKinnon's other arm was held. The drive did end with a fourth and 2 stoning of Jordan Howard led by cornerback Richard Leonard.

Anyway, with UAB a first down from field goal range, defensive end Michael Wakefield drew a holding call. First and 20 at the UAB 47 and a posse chased quarterback Cody Clements from the pocket into a 3-yard gain. Second and 17, Imarjaye Albury with a sack. Third and 19, Wakefield with a sack for a loss of 11 as Giovanni Francois gets flagged for offside. Wakefield, in particular, that series devastated his man on each play. I thought, "UAB should decline this, punt, figure out some scheme for blocking Wakefield." Seriously, I thought a punt would be better for UAB than whatever might happen on third and 14. I wondered if Clements might be thinking "Decline the penalty, I'm getting beat up here."

UAB took the penalty, as positive thinking and all good sense indicated the Blazers should. And on third down, Clements threw a ball that three FIU defenders had a better shot at than his intended receiver and Leonard intercepted. He ran it back 46 yards to the UAB 14. FIU got a field goal out of that.

"We just wanted to eliminate the big plays. Coach told us we'd have a bunch of chances to get interceptions this week and we took advantage," Leonard said. "There was nothing different about it -- in their face, disrupt the timing."

UAB kept throwing long and hit two, a 40-yarder to JJ Nelson and a 34-yarder to tight end Gerald Everette, plus got that pass interference call on McKinnon. They also failed to connect on a couple they had open. Nelson got behind Leonard in the second quarter, but dropped what would've been a pretty sliding bomb catch. UAB scored the next play anyway when Everett did his monster truck act through the FIU secondary.

Still, three completions over 20 yards and one pass interference to four interceptions is a hit-to-pick ratio any defense will take and walk out laughing.

Something else that should be noticed is FIU's defensive discipline. All those times Cody Clements left the pocket usually skedaddling from danger, rarely did FIU lose track of receivers downfield. Meanwhile, FIU's line kept good lines of pursuit. Clements broke free for one 19-yard scramble and the 15-yard touchdown in garbage time. You get pressure like FIU got all game, you'll take two plays of lost containment against the many where Clements took a sack, threw it away or ran for picayune gain. On the two fourth downs UAB tried to draw FIU off, the Blazers wound up jumping early.

Of the 380 offensive yards FIU allowed, most came on UAB's first drive of the game and last two drives in garbage time. That pressure on Clements and Jeremi Briscoe helped with those interceptions. FIU coach Ron Turner agreed those weren't throws a comfortable quarterback makes. Five defensive turnovers, two that went for touchdowns. In the competitive phase of the game, the FIU defense outscored the UAB offense 14-13.

The Panthers didn't move the ball with consistency. They turned three short fields off turnovers into two field goals. Their 297 yards of offense won't raise any eyebrows, especially when 160 of those yards (53.8 percent) came on two plays. But they showed capability for the big strike again with the 75-yard and 85-yard touchdown passes to Jonnu Smith and Glenn Coleman, respectively. That's what UAB had done earlier this season.

By the way, big ups to Coleman, who had 106 yards on four catches and the block that sprung Smith on up the sideline on his touchdown. Wonderful speed shown by Smith on that play, outrunning a fast secondary.

Leonard, Coleman, soccer player Chelsea Leiva...those that missed their 2013 seasons keep showing what their teams lacked in their absence. Coleman's averaging 20.83 yards per catch on his 12 receptions. Leonard had two interceptions, made the aforementioned fourth down stop and did a cameo on offense running a jet sweep for 5 yards.

(Leiva had another two-goal game Friday night in the FIU women's win. Guess we should mention here the FIU men footballers lost their conference opener to UAB 3-2 on a goal with 20 seconds left.)

Both freshmen Alexes went the distance. Alex Gardner handled 19 of the 27 carries between he and Anthon Samuel. Gardner's roommate, quarterback Alex McGough, never got swapped out for EJ Hilliard this game, although early on, he couldn't hit the broad side of Big Momma.

"I was trying to throw the ball too hard. That's a big problem I have," McGough said. "They were playing pretty good defense throughout the game. I was trying to force it in the beginning. Coach Turner pulled me aside and told me 'calm down, throw the ball nice and soft, a catchable pass.'"

Turner said, "He did a really good job mentally and was focused. He just missed a couple of throws that he should've made early that would kept some drives (going), but he's not going to make every throw. He's a young guy. What I did like is that he did miss some throws early, but he hung in there, hugn in there, and just kept playing and believing in himself."

As for the running game, Turner liked some of what he saw, but didn't like the inopportune false start penalties and some blown blocks that blew up plays at the handoff.

"The good news is we got a win," he said. "The better news is I think we can become so much better because we hurt ourselves a lot."

Such as the three red zone trips off turnovers. Three field goal attempts, partially because there were three false start penalties. For the day, FIU had 10 penalties for 65 yards.

FIU a two-touchdown underdog against a team with talent but not much record of recent success. A flood of turnovers, including Randy Harvey getting a special teams turnover...yeah, this reminded me a bit of the Panthers beating Southern Mississippi a year ago.

About two hours before the game, UAB players began trickling onto the field. They walked around, some down to the opposite end zone before all arriving at midfield. They formed a shield shape. A step forward, arms wrapped around shoulders, they bowed they had a team prayer. No matter your relgious feelings, it was beautiful to watch the aesthetics of them coming together. I wish I'd shot video, but instead ot just this picture. 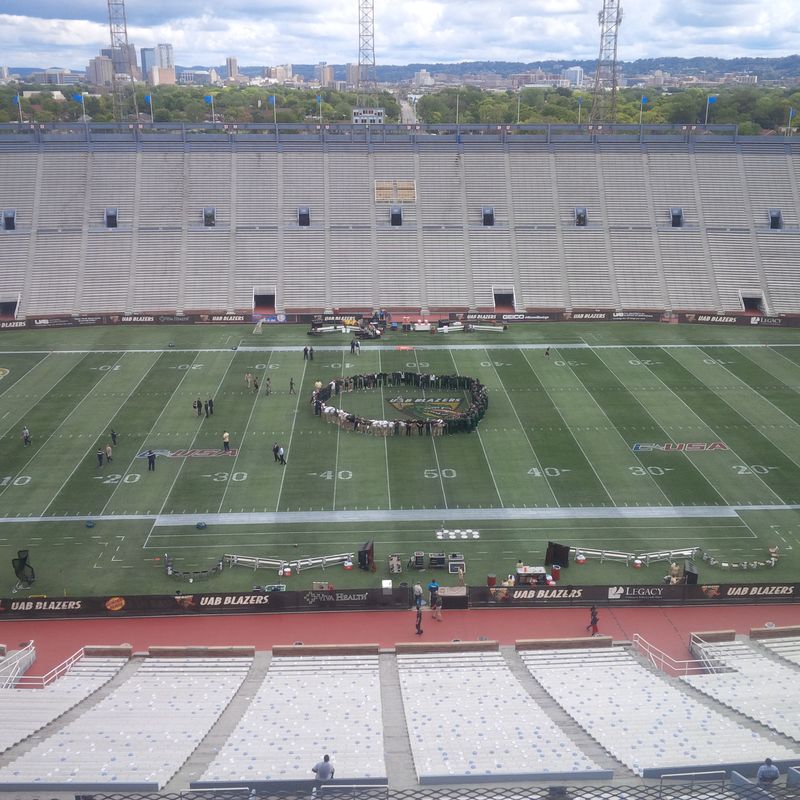 Also, here's a shot of the home side of Legion Field, as requested by chiapanther (file too big for Twitter). The announced crowd was 16,133. Even if that was the actual crowd (go with 10,000 to 12,000 actual) Legion Field still seats over 71,000, even without the removed upper deck. What would be a nice crowd for a stadium sized like The Cage, a stadium UAB would love, looks like a family club meeting in Legion Field.