A long night at FIU that left everybody's indicator on E -- on the field, excellence and entertainment. Off the field, embarrassment.

These numbers put the jam in FIU's donut: 7 plays, 70 yards, touchdown, first offensive possession of the game; 10 plays, 80 yards, touchdown for a 31-10 fourth quarter lead that ends the competitive phase of the game; 41 rushes for 185 yards as a team; 18 of 29 passing for 160 yards, no interceptions, for Alex McGough.

You need big plays to win. But, living offensively off big plays puts you in the same precarious position as living off restaurant food. Sometimes, the restaurant's closed or you can't get a table. Then, you've got to go back to getting your sustanence the simple, steady way.

"We scored on two big plays against UAB," McGough said. "We knew they were going to sit back and let us drive up the field. That's exactly what we did."

The last two weeks established Alex Gardner as the lead back with Anthon Samuel an able backup. A few weeks ago, the more physically mature Samuel appeared better built to handle the lead back pounding than the freshman Gardner. The last two weeks, Gardner's carried the ball 40 times with little dropoff. So much for looks.

That said, it was Samuel who got the ball the last three times when FIU coach Ron Turner was determined to muscle in a touchdown with FIU up 7-3 in the second quarter. Turner said afterwards as soon as Gardner's 12-yard swing pass reception put FIU on the Owls' 2, he told his staff, "We're in four down territory." They were going for it on fourth if the distance was a yard or less. Turner figured FIU would need points. Also, if stopped, the defense would hold and give the offense good field position. I also thought the offensive line needed both a show of confidence from the coaches and something to show for the effort. Against Wagner, they'd failed in a similar situation. You need a line that believes wholly it can gain 1 yard.

On his 24-yard touchdown run, Gardner's hard cutback through a left side hole in which you could've roasted a pig showed nice vision.

"I thought we blocked the guys up front well (against UAB)," Turner said. "The guys making the tackle last week -- we averaged only 2.7 yards per carry -- was the safety. They had an extra guy in the box all day. I thought our guys did a good job.

"At the end of the game, we ran the same play five or six straight times. If you can go that and control it, you've got something going."

Speaking of scoring or not...I'm not sure I've ever seen a team pitch a shutout for a half while giving up 236 yards of offense. That's what FIU did in the second half. Two words: Richard Leonard.

The redshirt junior cornerback's not a one-man defense. He is, however, the defense's prime banana in the tailpipe. He stops offenses with the kind of defensive impact plays FIU's lacked with any kind of consistency since 2011.

Last night, I was reminded of the 2001 NFL team that played college-affiliated football out of Coral Gables. As that team hung on to a 12-7 lead with Boston College driving, Dan LeBatard said to another Herald writer at the game, "It's Ed Reed time." And Reed, soon after, took the ball out of the hands of a defensive lineman who had intercepted a deflected pass and flew down the field for a touchdown.

"I've learned from my mistakes in the Pitt and the Louisville games," Leonard said. "More focused, just attacking the ball, really."

The fumble return demonstrated instincts of a playmaker. Falling on the ball works, there, too. FIU ball at the 20. But playmakers obey the instinct that tells them to see the rock and make it gold. Sometimes, that doesn't work -- the ball bounces the wrong way, player trips or slips. But when the playmaker times the bounce and gets a litle help, well...

First, give credit to safety Jordan Davis for getting to the hole and ball carrier Jay Warren. The Davis' caused fumble bounded into the end zone. Leonard gave a get-out-of-here to FAU quarterback Jaquez Johnson. He credited McKinnon's block on tight end Jenson Stoshak as the one that set him free. Then, somewhere around the FIU 40, Leonard engaged his 5.0 engine and...whoooo-wee.

By the way, along with Davison Colimon's recovery of a Michael Wakefield-caused Warren fumble earlier, that's five fumble recoveries this season after an opponent got inside the FIU 10.

Leonard also had four of FIU's seven pass breakups. He might consider three of those breakups missed interception opportunities. If he does, he should give himself a break. On kickoffs, FAU pooch kicked to avoid him. Meanwhile, FIU went right at FAU's Lucky Whitehead, one of the nation's best returners. Whitehead took his lone punt return back 21 yards, but averaged only 21.7 on his three kickoff returns.

FIU got pressure on Johnson, but only one sack, Denzell Perine's strip that Lars Koht recovered to set up the first Samuel touchdown. Still, the pass rush got to Johnson. Some of his throws got rushed by a half-second to a second, when he didn't set his feet or take the breath to have good mechanics. Thats' the difference between completing maybe 60 percent and completing 19 of 42 (45.2 percent) for 225 yards as Johnson did.

FIU Stadium's inadequacy as an FBS facility caused some ludicrous snapshots during the halftime lightning delay.

There were the FIU media relations staffers, forced into the stadium's outdoor Tent City by no room in the press box, getting hassled by stadium personnel trying to herd them inside as they tried to save their laptops containing years of FIU athletic' teams' information. Inside the press box, you had FAU student reporters, who had been stationed outside, laying on the floor as if this were a finals' study group.

Meanwhile, the tarpaulin covering FIU radio's equipment blew off, exposing the electronics to the rain and ending the broadcast. Over in the FAU radio tent, the rain destroyed the phone lines they had to use for broadcast. Their broadcast continued in the second half via cell phone. An engineer got shocked several times as he tried to get the equipment running. 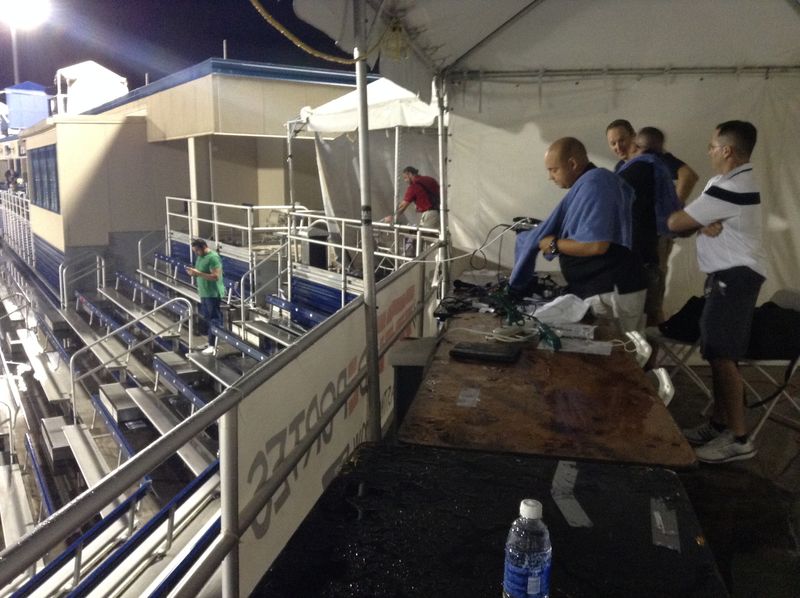 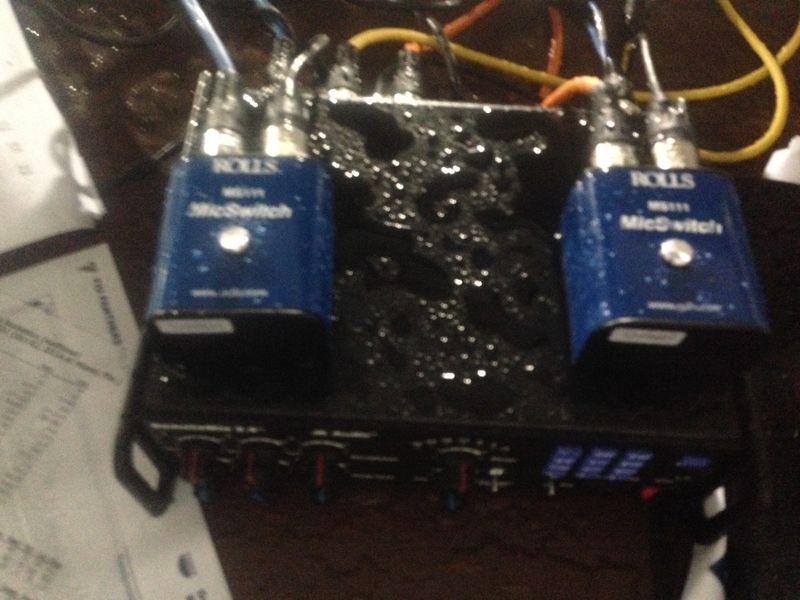 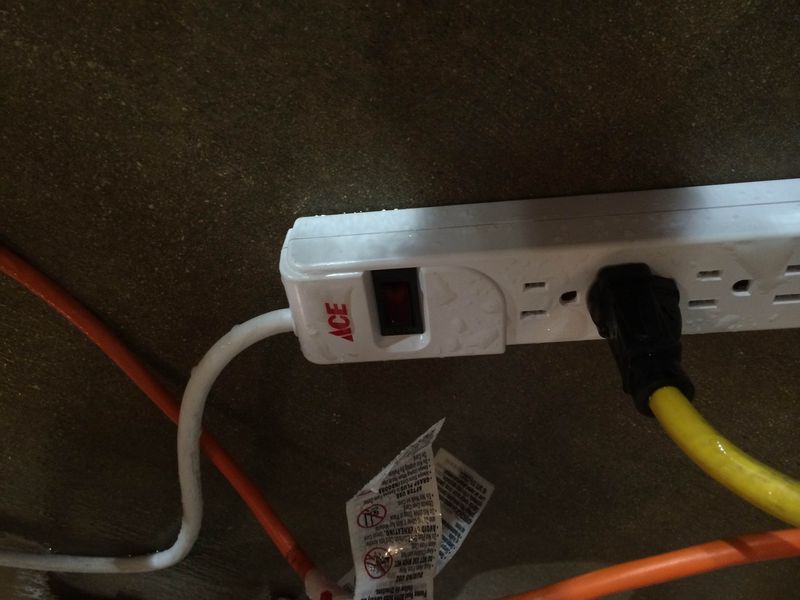 This shouldn't happen at this level of college-affiliated football. I wouldn't be surprised if FAU's radio team files a complaint with Conference USA.

Put some of the media in unsold suites, which aren't wired for radio, so radio crews can work inside the press box. Maybe that's not possible. Lift small trailers up to that level. But the athletic department and facilities need to do something so everybody who is usually inside a media box -- coaches, media, NFL scouts, etc. -- can be inside something. These days, everybody's got electronic equipment that can be ruined by rain.

You don't have to be big time to leave a positive impression. Just don't be small time. Getting knocked off the air by wind and rain must be considered unacceptable.

(This is a department and facilities problem, not a media relations department one. They merely have to play the hand they're dealt).

Bowl eligibility sits on the next landing a few steps up from where FIU stands right now. I did not think I'd be writing that sentence on Oct. 3.