With FIU and Marshall tied 1-1 and the clock ticking down in overtime Thursday, the Panthers got the ball to senior forward Chelsea Leiva.

"Both teams, we didn't really play the way we wanted to, but we both fought really, really hard," said Leiva. "I know we did. Our legs are shot."

FIU coach Thomas Chestnutt admitted, "It was a fair result, I'd probably say," in the voice of a man who knows if you leave too many loose ends, they eventually snake together into a noose.

The 1-1 tie was a loose end, just like late game losses at home to North Texas and Charlotte. FIU's best hope for a fall Conference USA team title sat at 8-8-2 overall, 3-4-2 in conference and needing help just to get into the conference tournament. Specifically, FIU needed FAU to tie or win at Louisiana Tech in a game that was entering overtime as FIU's Senior Night ceremony ended. Then, a Panthers win Sunday in the weather-postponed game at Alabama-Birmingham would get FIU into the tournament.

Senior Johanna Volz, who scored FIU's goal, said part of her reaction in the above video was at the final score, but most was "a little bit of sadness. Coming to realize this is all over. It feels like yesterday we were freshmen."

Ask most athletes what they'll miss most when they stop playing and they rarely say the games. It's what Wayne Gretzky called "the back of the bus" or Chris Rock said of "Saturday Night Live" "The hang."

"This class, we have a bond that I think is tighter than other classes," Volz said. "We came in with eight. We're leaving with seven. That's rare. I know in five years, 10 years, 50 years down the road, the people I'm going to check on are my teammates. I couldn't have spent four years with a better group."

When Volz's class were freshmen, their sheer fitness level became a challenge to the juniors and seniors. FIU won the Sun Belt tournament that season, 2011. Ashleigh Shim won the Sun Belt Freshman of the Year award. Volz figured each year they would get better, so she thought she would leave in four years with four conference championship rings. They won the regular season title in 2012 before getting upset in the Sun Belt final by North Texas. The 2013 season got derailed early with Leiva and defender Nikki Rios, arguably FIU's best offensive and defensive players, going down with season-ending injuries before the season started. Ineligibility took out forward Scarlet Montoya.

And, now, this year.

"There hasn't been a game this year where we felt like we were dominated by any team," Chestnutt said. "It didn't matter if if whether it was Santa Clara, No. 23 at the time, Long Beach (State) or at the top of our conference, Rice or North Texas. The team largely outplayed almost every opponent. The difference, ironically, was lack of finishing at the proper moments. But the team defensve has been fantastic. There's only been three teams in the whole season that have registered 10 or more shots. That's excellent stuff."

He said of the senior class, "They"ve done a phenomenal job here, raising the level of the program. The things that they've accomplished are second to none in the history of the program. I just hope we can extend our season for one or two more games."

The news came to a few from Ruston, Louisiana via Twitter, app or old fashioned phone call: a golden goal by Tech ended Blue and Gold hopes.

Volz lay on her back with hands over eyes, her captain's armband still dangling. She got to her feet with eyes glistening. The word filtered among those not soaking up every minute of this last 2014 home postgame with parents, friends or the youth soccer players who had manned the sidelines as ball girls. The coaches gathered the team so Chestnutt could deliver the news. 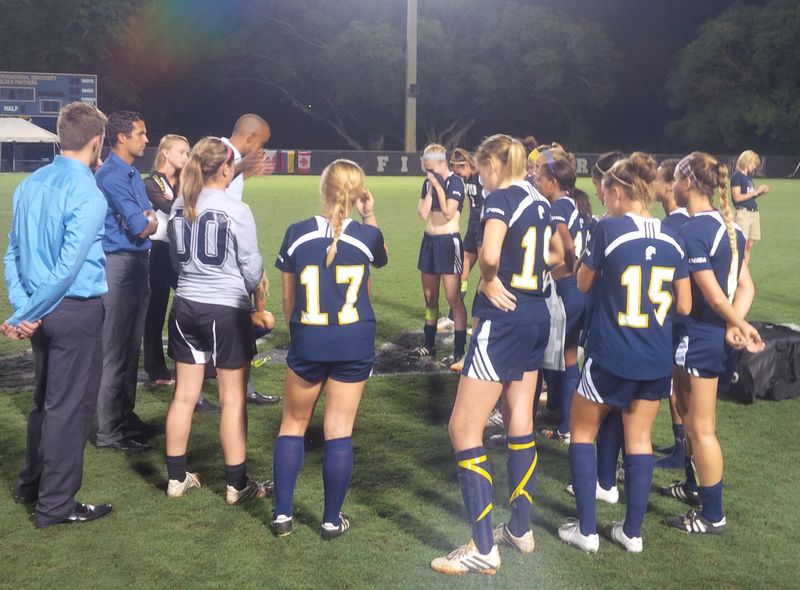 Some soft sobs, then a few not-so-soft sobs burst out of the huddle. Chestnutt spoke in a tone that suggested his own emotion monster threatened to ride a sentence out of his mouth and devour him. The team closed in a mass hug, seeming to become one tight organism for a moment, flexing together then releasing. Scarlet Montoya gave a heartfelt speech to the group, her voice strong, but teetering on breaking every other word. Another player apologized to the seniors.

Leiva walked away by herself toward midfield, using her jersey to cover a face now drenched in emotion. She'd already cried talking with me and The Beacon's James Profetto (who covered this team this season with the devotion of someone who wants a job in journalism) about her time at FIU ending. Profetto asked what she would take away from her time at FIU.

"So much...a lot of life lessons that we learned..." Leiva said through tears. She expanded upon that by crediting Chestnutt, mentioning hard work, perseverance and many of the concepts parents doing the Saturday Morning Schelps hope their children will learn from team sports.

But, now, Leiva stood alone until freshman goalkeeper Ashley Westbury came over to offer an arm and a hug. Others lifted their shirt as crying towels. Teammates shared extended embraces. I've been in a number of locker rooms with the season freshly killed over the last 24 years, but I hadn't seen a team this heartbroken since the Jackson High locker room after the 1990 Soul Bowl loss to Northwestern on a bomb to Stinky Williams in the last minutes at then-Joe Robbie Stadium.

She remained there for I don't know how long. No explanation needed.