Just throwing that out there after FIU announced Monday that Lakeland Christian's Christian Alexander would enroll early this January.

According to MaxPreps, Alexander's completed 163 of 265 passes (61.5 percent) for 2,613 yards and 34 touchdowns against only seven interceptions for Lakeland Christian. He's also run for 427 yards at 5.7 per carry. Lakeland Christian faces Jacksonville Trinity Christian with 2015 commit Deion Eakins at offensive guard in the next round of the Class 3A playoffs. Alexander's rated at three stars across the board and reportedly had offers from Central Florida and the University of Miami. 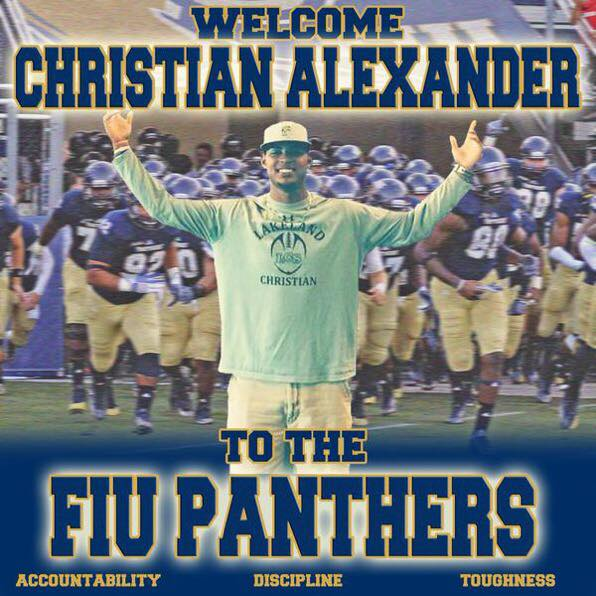 As reported in a previous blog, Hilliard asked for his release Monday. After he missed a team meeting Friday morning, Hilliard tried to contact the coaching staff. Elgin Hilliard, EJ's father, said he next heard from a coach when the coach was on the team charter to Dallas Friday afternoon for the North Texas season closer. Hilliard was left back in Miami. So was senior offensive lineman Yousif Khoury.

Feeling that crossed the fairness line for a player who hadn't been a problem and unhappy Hilliard hadn't been given more of a chance when the offense struggled under McGough this season, Hilliard's family went in Monday to ask for his release.

"He came in and asked for his release and we gave it to him," FIU coach Ron Turner said.

Also not in the final game were redshirt junior wide receiver Dominique Rhymes and junior fullback Lamarq Caldwell. Caldwell didn't play in the final three games, Rhymes the final two. Turner wouldn't say each was suspended for violating team rules (Turner generally doesn't like to talk about team discipline), but did say the two didn't make the travel roster.

As for whether or not each will be back next year, Turner said, "They each have one more year of eligibility remaining. I'm going to meet with each player on the team next week to talk about what they need to do moving forward."

I'm betting against Rhymes being back next year. He'll end the FIU portion of his college career with 28 catches for 317 yards, no touchdowns.