Ironic, appropriate or both that the first women's basketball home game after Cindy Russo's retirement is against Old Dominion, alma mater of Russo and longtime associate coach Inge Nissen?

You don't need a shot of Old Grand Dad to know that FIU's got a shot at Old D if they find their defense. it's the only area of clear superiority for the Monarchs. In Conference USA play, Old Dominion has given up only 58.9 points per game and 35.9 shooting from the field. FIU's given up 74.5 and 45.8. And that's with a conference-leading three-point shooting percentage defense of 27.2 percent.

Old Dominion's men share four characteristics with the FIU men -- good defense and conference losses to Western Kentucky and at Alabama-Birmingham and Middle Tennessee State. But the Monarchs lead the conference in rebounding margin while FIU is last in assists per game and scoring offense. Not a good combination when you've got a ball stagnant team against a good defense. We'll see whether the 12-day gap swung FIU's offensive game toward the acutely sharpened or the obtusely dulled.

FIU's arena-based teams could move wholly back into their spaces today, the last day any Miss Universe people or stuff should be in the arena or parking lot.

That's according an FIU synopsis of the agreement between the school and Miss Universe.

A seat count from various photos taken late last week after the arena got set up for the contest comes up with 1,118 chairs + an estimated 1,500 bleacher seats on each side. That's 4,118, but the Miss Universe folks got 1,000 comp tickets per night. Preliminaries, Dress Rehearsal and the Finals sold out. FIU's $5 per ticket gets them approximately $46,770.

Anyway, it's back to normal for the FIU Athletics hoi polloi, whose staffing, workload and pay sometimes remind me of this scene from the 1985 classic DC Comics Crisis on Infinite Earths No. 8. 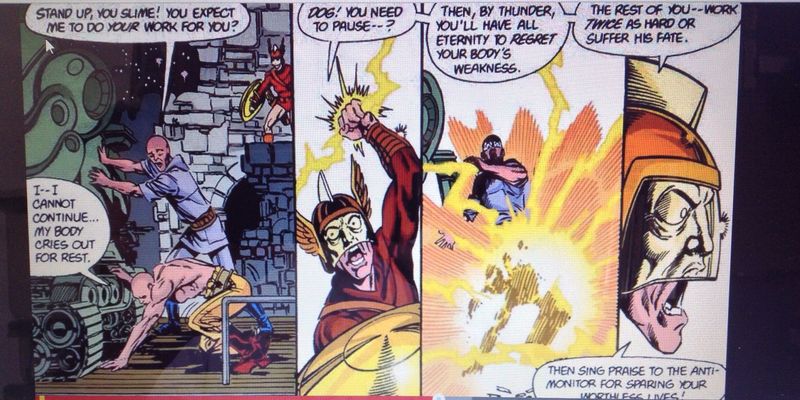