I'll be all over the place here.

FIU Arena's being prepared for its new seats and beach floor. 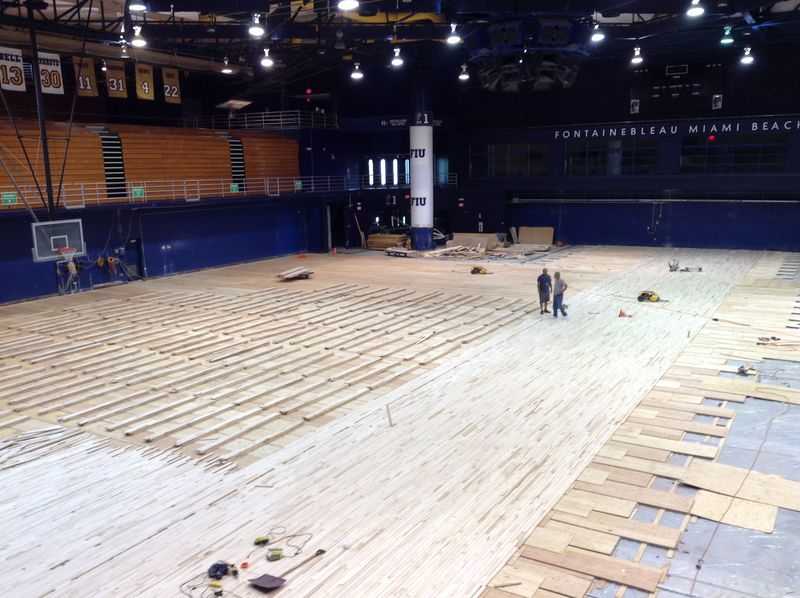 The athletic department caught a big break when that CrossFit-like (but not CrossFit, CrossFit wants to make sure you know) competition broke the beach floor. Players and past coaches complained about how unforgiving the old floor could be on knees and ankles. Now, FIU gets a new floor and somebody else pays for it.

Looking at head coach Marlin Chinn's contract, the first thing that struck me was the five-year deal gets extended a year each time FIU wins 20 games and makes the NCAA tournament. His base pay is $161,000. He gets a $10,000 bonus for a single season team Academic Progress Rate of at least 970 (the team's been a perfect 1000 each of the last three reported years) and another $10,000 for team GPA over 3.1. He gets an extra $7,500 for each of these achievements: getting into the NCAA tournament, Conference USA Coach of the Year, sole possession of a regular season C-USA title.

I heard the whole women's basketball coaching staff got sacked Monday by new coach Marlin Chinn. That's high on the expectation list when a new coach comes in after the disaster of 3-26, 0-18. I'd be willing to bet longtime assistant coach Inge Nissen winds up somewhere else in the department or university.

I wasn't at Sunday's Athletic Academic Awards Banquet (also known as "Dress Up for Food & Instagram Shots"), which would've been a great time for a sayonara ceremony to Nissen and former head coach Cindy Russo. Considering how long and well they coached at FIU, that would've been nice. I'm not sure Russo was even invited. In her last three full seasons, FIU went to two Women's NITs and got farther than Jerica Coley's superpowers should have taken the Panthers in last year's Conference USA tournament (the program was rewarded with being told the run took the team over its travel budget for the season).

Speaking of baseball, senior shortstop Julius Gaines gave the invocation for the entire event and received the team's Leadership Award. That capped a good Sunday individually for Gaines. Earlier in FIU's 5-4 11-inning loss to FAU, he cracked three singles to break out of an 0-for-18 plunge that also prompted a plunge down the batting order Sunday. Coach Turtle Thomas moved Gaines from leadoff to eighth.

"I definitely don't need to send a message to Julius Gaines. He's been with us for four years. He's a good baseball player," Thomas said. "He made some really good defensive plays today. (Moving down to eighth) gets you down there where you maybe see a few more fastballs, they're not killing you working you over in the top five of the batting order. It's just to give him a different look."

Gaines said at the plate, "I got out of my head. I just went up there and said I was going to put a swing on it and whatever happened, happened." As far as hitting eighth, he admitted, "There's not as much pressure. You worry about your at-bat at that time and whatever situation comes. Leading off, it's your job to get on base. It can weigh on you a little bit."

While Gaines shrugged off his defensive day as, "I did my job. It wasn't anything out of the ordinary," FAU coach John McCormack said, "Some plays that the shortstop made in this game? Wow. Julius played really well. Thank God he's leaving this year."

Gaines made a game-saving (for the moment) play in the eighth on pinch hitter Danny Murray's tough grounder with the bases loaded. McCormack marveled that Gaines operated efficiently enough to get control of the ball, see he'd be too late for the force out at second and still fired a Murray-beating throw to first.

McCormack said two other things I found interesting. He blamed himself for FIU's 6-5 win Friday. He said he should've gone to Seth McGarry immediately in the eighth with a 5-2 lead. Instead, he used lefty Devon Carr, who gave up two hits and a walk in four batters, sparking FIU's four-run eighth inning.

He also said he didn't believe in any FIU-FAU rivalry.

"I don't believe in rivalries because the players continually change," McCormack said. "I'm not big on, 'Win this one for The Gipper, they're our biggest rivals.'"

Out on the football field, Ron Turner said FIU's lack of experience at wide receiver and abundance of tight ends and running backs wouldn't mean FIU would use double tight end sets more in 2015 because "we did a lot of it last year." But, Turner said, they'll use more sets with varying position numbers and groupings now that FIU's in the third year of running his offense.

"I've told these guys from Day 1 I really believe in utilizing our personnel and moving them around. If you've got a guy and he's always in the same spot, they can take him away very easily. That's one of the biggest things I learned in the NFL -- get your playmakers involved, put in position to make plays. We've done a little bit of that the first couple of years, but not as much as we'll do this year. In that league, they pay those guys a lot of money. The owners say, 'I'm paying him a lot of money, why isn't he getting the ball? Why isn't he involved?'

After saying he was excited about all the different options for FIU, Turner joked once spring football ends, the coaches will have too much time to come up with too much other offensive stuff to teach. Or, maybe he was only halfway joking as staffs do make that mistake more often than is noticed.