One big advantage of Conference USA over the Fun Belt -- CUSA's a tremendous bowl slut, hooking up with lower rung bowls, helping create new bowls and generally making sure there's a plethora of bowl beds for its teams to lay their heads come December. I think they're related to every bowl under Rose and above American Standard.

Seven primary bowl tie-ins this year (Heart of Dallaskeep most member team's fans tractable even after a conference title drops from the List of Possibilities. So, I'm expanding the weekly Top Six to the Select Seven.

2. Louisiana Tech (3-2, 1-1) -- Running back Kenneth Dixon got tossed from last week's win against Louisiana-Lafayette, but he'll play at Texas-San Antonio.

3. Marshall (4-1, 1-0) -- Only two receivers over 11 yards per reception. That' means they need to get their chunk yardage from the big chunk of a running back, Devon Johnson. They do.

4. Middle Tennessee State (2-3, 1-0) -- After close losses to Illinois (who looks better than usual this year) and Vanderbilt, seeing visit to Western this weekend reminds me of the old Bernie Mac line "I ain't scared of you!" If Middle loses, next week's home game against FIU becomes an elimination game as far as the conference title.

6. Rice (2-3, 1-1) -- Love each conference's smarty pants private school rising up to tweak the schools who never have to worry about players making it into school.

7. FIU (2-3, 0-1) -- After FIU's 7 personal fouls or unsportsmanike conduct penalties over the last two games, UTEP should be practicing "Yo, Mama" snaps for dropping on Panthers at the key moment to draw a retaliation penalty ("Man, yo' mama's so ugly, I told her to wait for your sister outside.").

There's not much that'll help the crowd for a noon game against UTEP after two losses. So, FIU's making a measured raffle-focused effort at the student attendance after getting enough tickets distributed for the home opener.

Students entering the game at Gate 5 or 6 before halftime will get a raffle ticket with the chance of winning $1,000 tuition. The winning numbers will be shown on the video throughout the game and you have to be in the house when your number comes up to win. Also, there's a jersey giveaway at the end of the third quarter on the Panther Beach Party Deck, right up there near the drive-in projection booth that houses each school's radio team.

Also, you can start buying tickets to win this ball, autographed by the whole team and coaching staff. 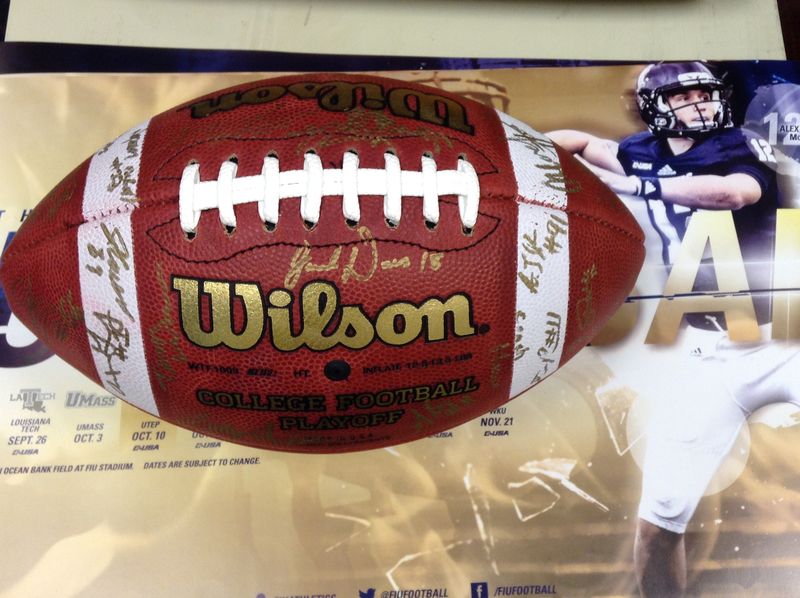 The winning number will be announced during the second half of the Homecoming Game, Oct. 24, vs. Old Dominion.