« Who is Donte McGill? | Main | Who is Daviyon Draper? And Women Up, Though Still Down »

Life changes fast in FBS. So fast that FIU head football coach Ron Turner's now in the middle of the FBS head coach pack as far as longevity at his school.

That's according to FootballScoop.com's annual list of FBS coaches by longevity. Turner ranks 67th out of 128 on the list, which lines up the coaches by hiring day.

You'll notice in the above item, I didn't just use the information from FootballScoop's list. I told you it was their list and provided a link to it. You'll also notice early in the FootballScoop.com story, the writer pokes fun at himself while giving credit to the former colleague who began doing the list three years ago.

This is what you do when you want to use information or quotes gathered by another media entity or if you want to localize a national story. You don't just lift quotes and copy entire blocs of prose, then use them as if you'd done the interviewing and writing.

Which is what The Beacon's Cayla Bush did for her The Shade Locker column that ran Wednesday in print and online. The story she ripped off was my Miami Herald story that ran online Jan. 14 and in print Jan. 15. The Beacon was made aware of this Wednesday when I called them. Bush's column remains online unchanged.

Perhaps Ms. Bush and I share a Vulcan mindmeld of which I haven't been previously aware. As you can see here in screen grabs from the start of my Herald story and the early part of her Beacon column from six days later: 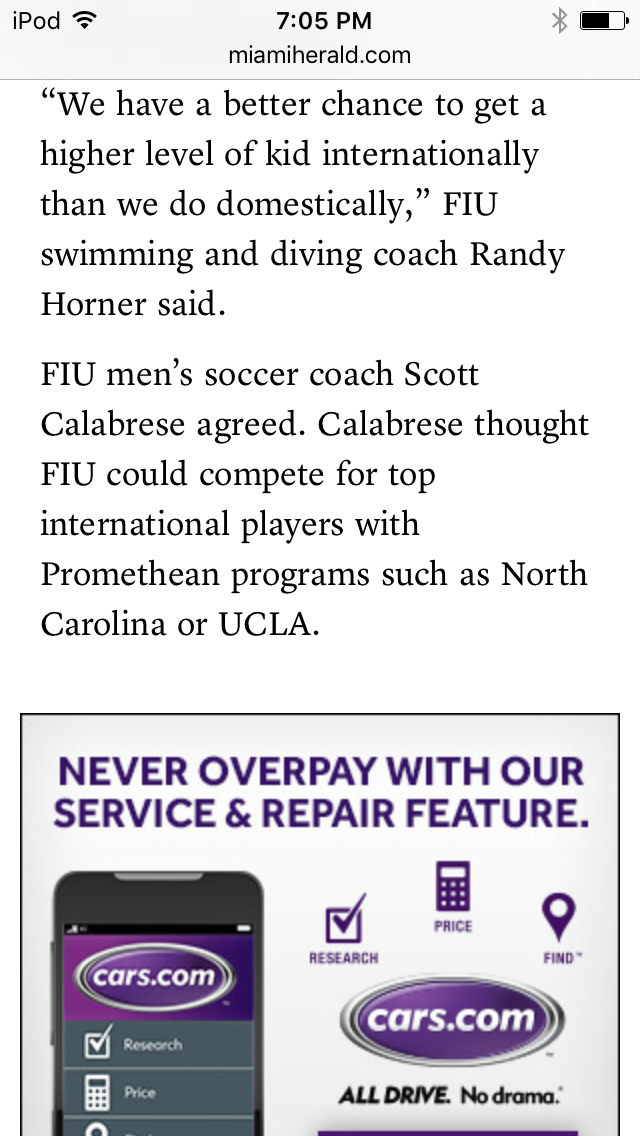 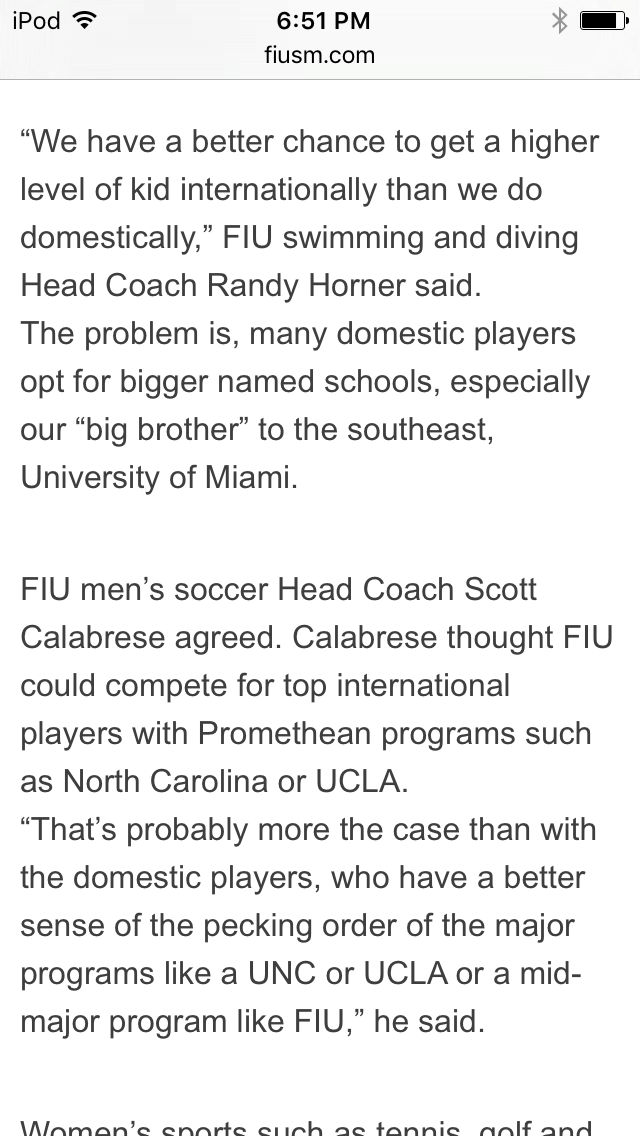 Nice of her to add in a little of her own prose between the Horner and Calabrese portions and take out the earlier paragraph she stole that appears in the print version of The Beacon. 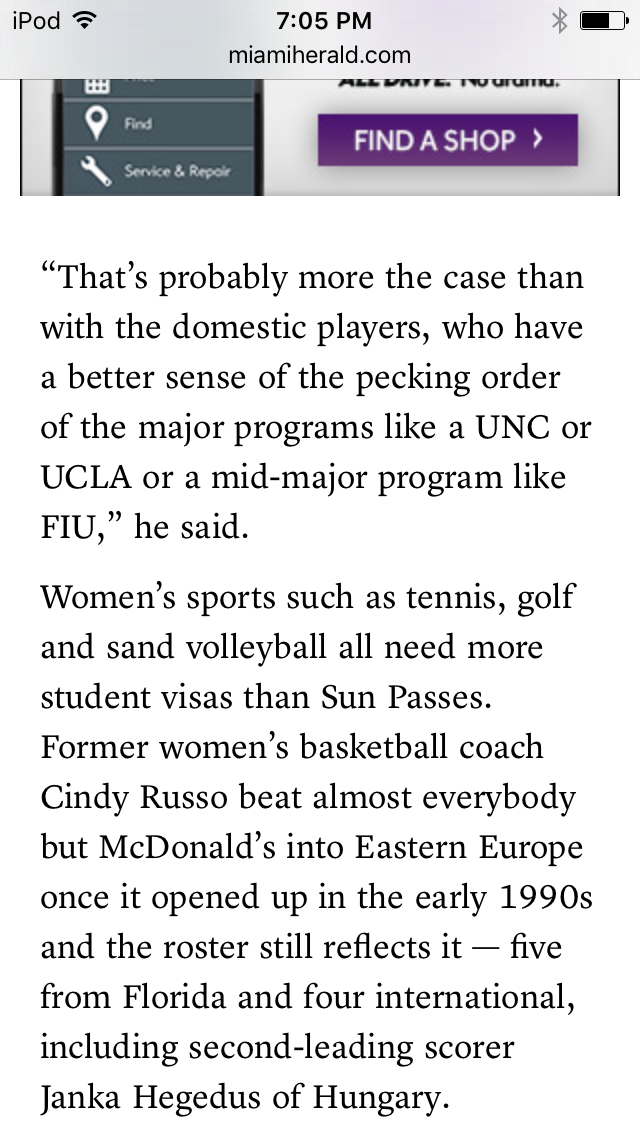 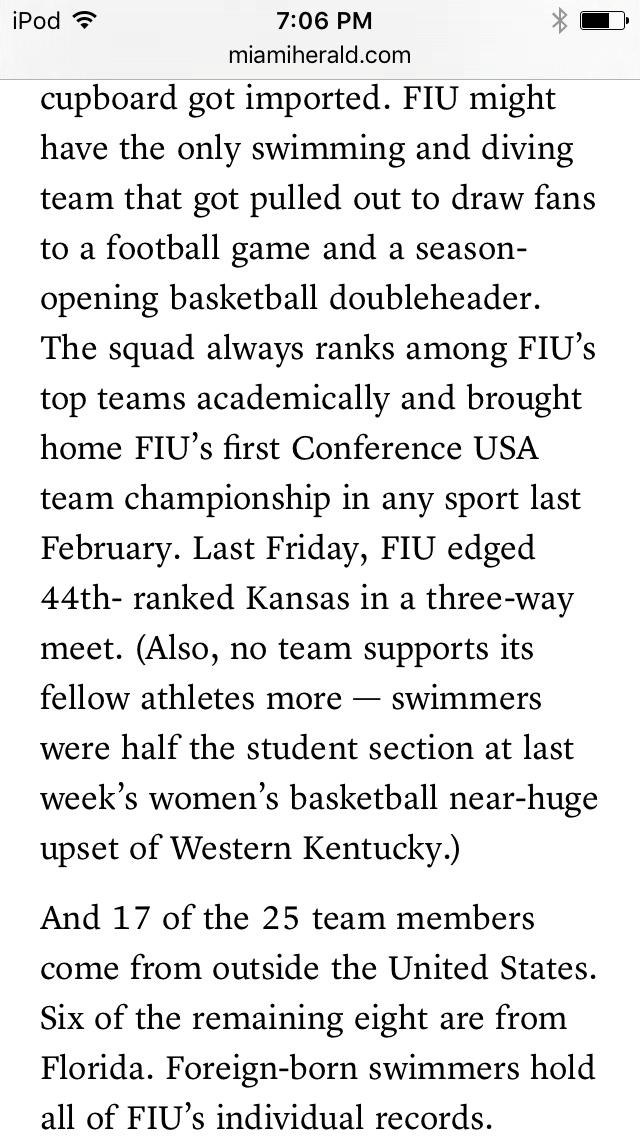 Completely unaccredited, this is what appeared in Bush's column. She made a token -- if lazy -- attempt to change the time element in referencing the FIU-Kansas swim meet by adding the date, but left "last Friday," which it no longer was by the time her column ran. 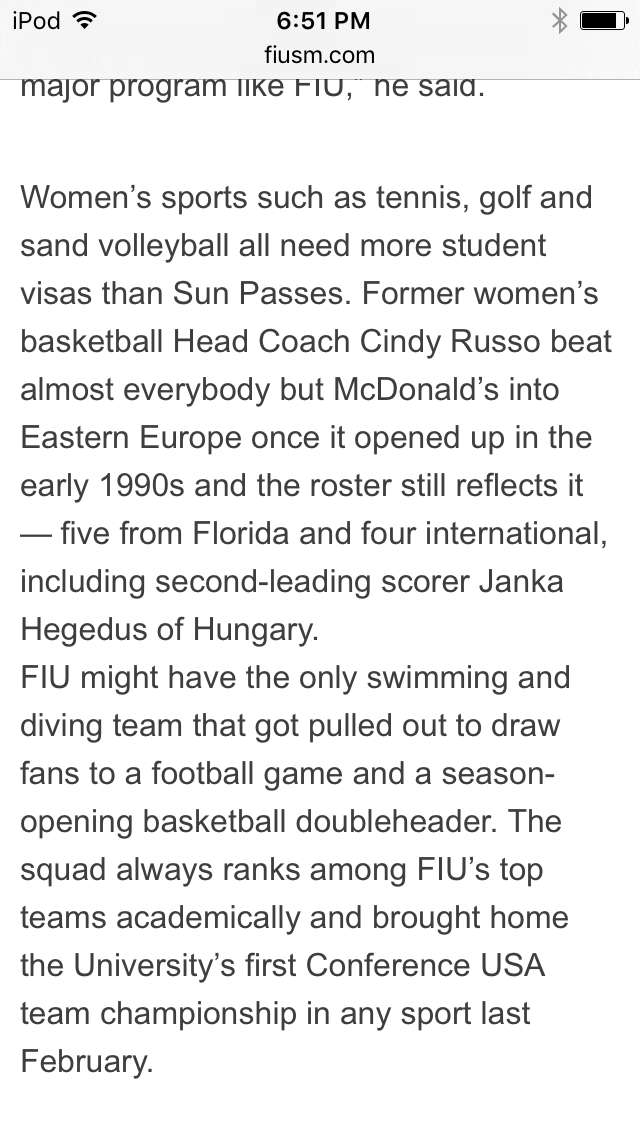 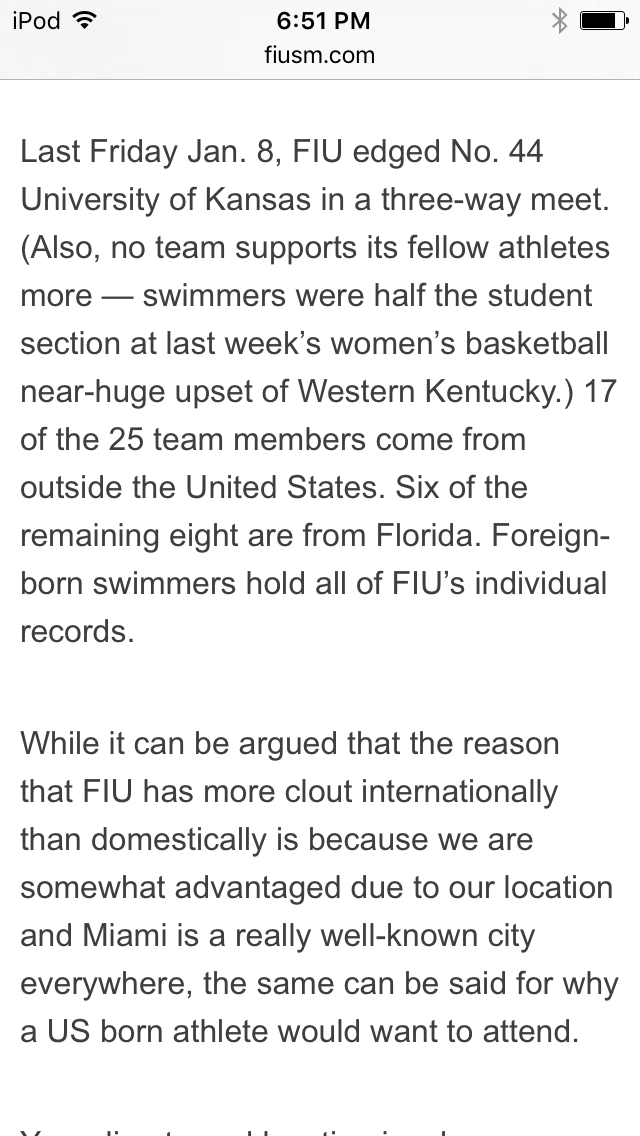 Hint to plagiarists -- when you want to steal copy, at least change the less-pedestrian word usage, such as "Promethean" from earlier in the story and "omnipresent" in the following screen grabs: 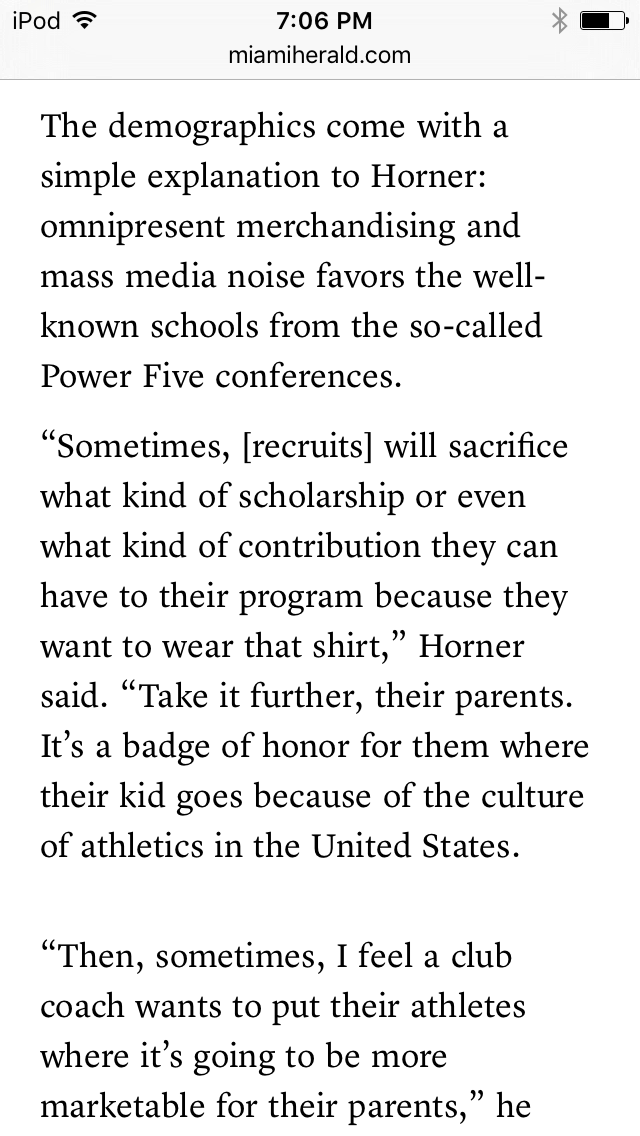 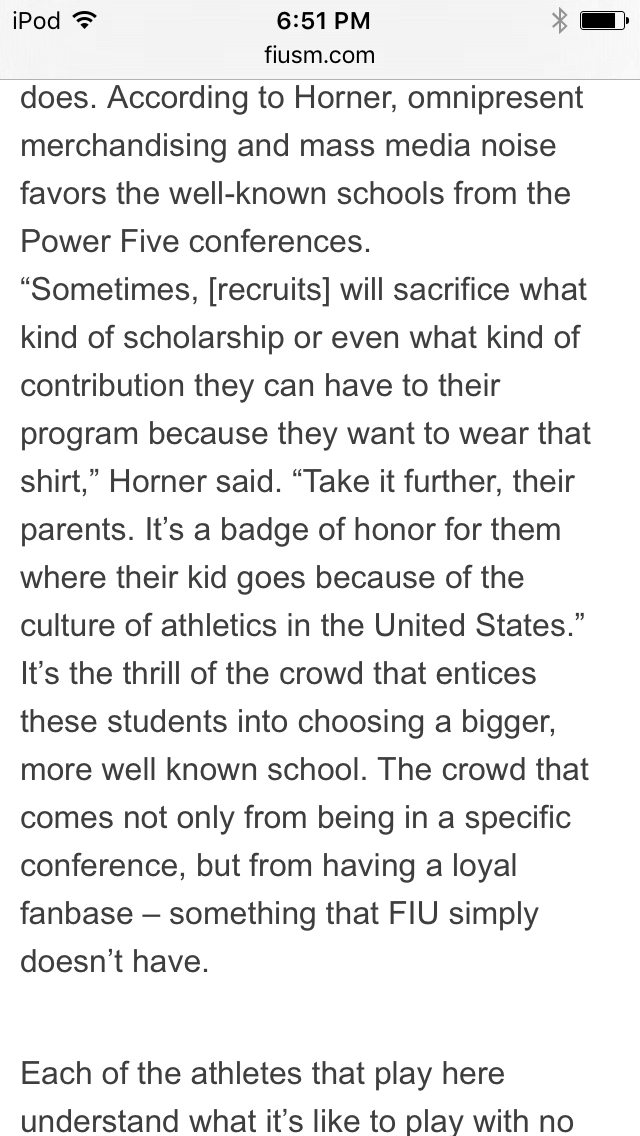 Some Beacon writers and reporters approach their task with great professionalism and gusto. Others don't. It's the nature of a college student newspaper. But plagiarism's a big no-no in middle school. You'd think college students would know better.

Or at least show a smidgen of shame when busted on it. 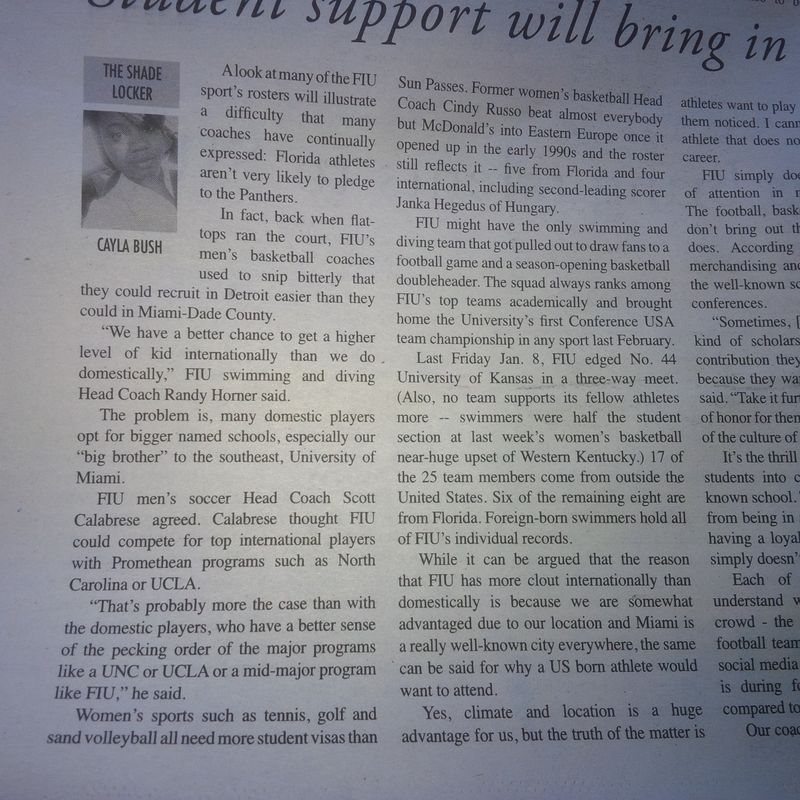