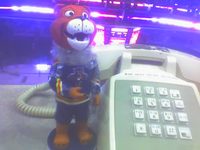 Too bad no one knew about it.

According to people within the organization, the Panthers didn't make public the fact they were having a giveaway basically because they didn't have enough goodies to, you know, giveaway.

Because most season ticketholders and sponsors get guaranteed giveaways, a good portion of the 5,000 bobbleheads had to be pulled and held onto. So, there may have been a little more than 1,000 of them given out. According to the team, that's too few to advertise.

One person within the organization acknowledged there were mistakes made, and truthfully, if the team makes 5,000 bobbleheads, it probably should pony up to make some more and have a true promotion.