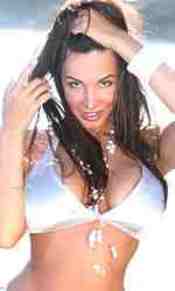 Covering baseball this weekend at JRS and felt compelled to let you, the loyal reader of On Frozen Pond, know about who the Marlins rolled out to throw out the ceremonial first pitch Saturday night.

Instead of a local politico or unknown executive, the Marlins were very proud to introduce Ms. Mayra Veronica. To those not in the know, Ms. Mayra was named one of the sexiest women in the world by the late, great, FHM magazine.

After doing some diligent research, I found that Ms. Mayra came in 12th in the FHM rankings. I also found some pictures of the young lady. Sometimes research comes with a reward.

I now turn my attention to talking to the Panthers. We need to get Ms. Mayra at some hockey games. She could drop the ceremonial first puck at some games.

Every night you say? Let's see what we can work out.

-- For those of you going "what in the world does this post have to do with hockey?" Simply put: It' doesn't. 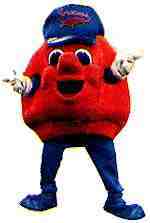 But this does: Steve Goldstein and the Marlins held a youth camp here at Dolphin Stadium Saturday morning. It's part of Steve's charity work with Goldie's Gang. Good stuff. Goldie has his charity golf tournament this week down at Miccosukee in south Miami. A good cause worth supporting. For more info, check here: GOLDIE'S OK WITH G