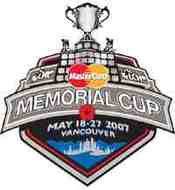 As the NHL playoffs roll on, the Memorial Cup -- the championship tournament of Canadian Junior Hockey -- is off to a rollicking start.

The four-team tournament (featuring the champions of the Ontario, Quebec major-junior, Western hockey leagues and the host city) kicked off Friday with the host Vancouver Giants beating Plymouth 4-3 in overtime. The game set a tournament record as Panthers prospect Kenndal McArdle (first round pick in 2005) scored the game winner.

There are a pair of Florida prospects playing in the tournament, with McArdle tied for seventh with two goals in Vancouver's first two games.  Plymouth's Dan Collins hasn't scored in either of his two games.

Plymouth plays its final  prelim game tonight at 9  EST, with unbeaten Vancouver playing Medicine Hat tomorrow night. If a tie-breaker game is needed, it'll be Thursday; the semifinals are Friday with the championship on Sunday afternoon.