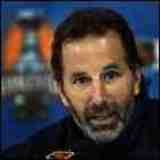 TAMPA -- Bolts coach John Tortorella has never shied away from controversy, and this morning, said the Panthers were whining about Nick Tarnasky's hit on Mike Van Ryn on Monday night.

Tortorella said Tarnasky shouldn't have received anything, much less five minutes for boarding, nor a 10-minute misconduct (that was probably for punching Bryan Allen while he was being held back by a ref, but whatever).

Torts even used Denis Potvin as an example in his pregame press conference, saying the league has gone soft.  He says in Denis' day, players expected to be hit and how a player took a hit was a big part of how the game was played. Now, he says, players don't expect to be hit.

You can see the press conference in its entirety at tampabaylightning.com

The fun stuff -- and this is being relative -- doesn't come until the end.

-- Looks like things are heating up between the Panthers and at least two of their division rivals, no?

Stuff like this -- and Divegate in Carolina -- only fuels the passion and stokes rivalries. I love it.