Nothing finer than diving in Caroliner 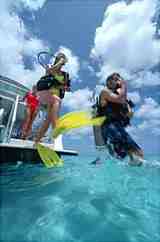 RALEIGH -- Well it seems the Hurricanes are finally upset about all this diving stuff.

The guess here is they are upset because some calls went against them. Sure, they were bad calls, but it's almost as if Carolina expects the Panthers to feel bad about the calls or to come out and say something about them.

Well, sorry, but as many times as the Panthers have been on the other side of a bad call, they ain't saying nothing. No one on the Panthers think the two diving calls handed out Wednesday were warranted, but they sure as heck aren't giving them back.

Personally, I don't know if the Hurricanes are a bunch of divers or not. Do they embellish hits to draw calls sometimes? I would say yes. If not, this is the softest bunch of pro athletes around.

-- Here in the first intermission, fixed the blog as you can see. Good game so far for the Hurricanes; Panthers are very lucky this game is only 1-0. Vokoun has been great in net, and John Grahame has had good games against the Panthers in the past.