« Rolling Down the Tracks | Main | Olli says things are OK »

Olli Unhappy, On the Block? 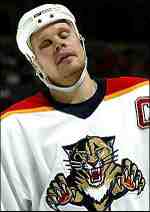 Well we must be getting close to the trading deadline because more rumors about Olli Jokinen's unrest in South Florida have surfaced.

The most recent report comes from CBC's Hockey Night in Canada. According to reports given to me (I didn't watch HNIC because I was covering the Panthers in Washington), it was dropped that Olli and JM don't get along -- Olli apparently hates Jacques -- and a trade is coming.

Surprisingly, the main teams who would be interested in Olli, the report states, are Canadian teams.

Now, I'm not saying Olli isn't unhappy with the current state of the Panthers right now. In fact, I'd be disappointed in him if he wasn't. But I don't think Olli and the Panthers are ready to part ways just yet. I think Olli has too much invested in this franchise and market -- and the team is too close to first place in a sorry division -- for him to bail now.

That said, if Olli goes to JM and asks to be traded, I think JM should and will grant the request. The Panthers could get a lot for their captain on a fairly open market, and I say open because Olli comes with a contract. He's not a rental for some team so Florida theoretically would get more.

I don't think Olli and JM are best of friends, but then, I don't think JM has many 'best' friends inside this business. He has pals, buddies, but nothing serious. JM is a very close-guarded guy, very private. So too, in a way, is Olli. The only guys I know he's really friendly with over the years are Nate Horton and Roberto Luongo -- and I think his friendship with Louie really got going after he was traded away.

Olli is always reportedly going somewhere, yet he never does.

No sport loves its rumors more than hockey, no sport treats pure speculation as gospel more.

Everyone just needs to relax. Olli isn't going anywhere, at least not in the near future. Not unless JM was offered the sun and the moon, and Olli really wants to leave. I just don't think either side is all that desperate to make a move like this.