(Not Much) Phun in Philly -- UPDATE 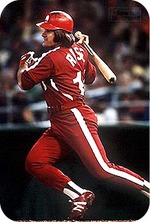 PHILADELPHIA -- Those who say you can't go back in time have never been to Philadelphia.

Lot of history here, obviously, and in the short time I've been here, I've tried to take a bunch of it in. From Independence Hall to the Liberty Bell to the Mitchell & Ness shop on Chestnut Street, it's been one big 'ol fashioned history lesson for me.

And it gets even better tomorrow: The Panthers are staying in the City of Brotherly Shove tonight after the game so they can practice here.

Yep, one of the last bastions of Philadelphia's sporting past will be the site of a meaningless practice by the Florida Panthers. But I've never been in the Spectrum, so I'm looking forward to it. Expect some photos on tomorrow's editions of On Frozen Pond.

What is the Spectrum known for, you ask? Well, it was home to the Broad Street Bullies, Dr. J and, of course, Rocky Balboa's classic battle with Apollo Creed.

-- For those interested, today's Philly Cheesesteak came compliments (well, Steve Y paid) of Jim's on South Street. Delicious. Best we've had so far. I think the days of us heading to Pats or Genos are over.

-- In hockey news, Cory Murphy and Branislav Mezei both wore yellow (that means they captured the previous day's time trial) and did a lot of post-practice work. No time table for their return.

-- Happy Birthday shout-out to Justin, the Panthers' favorite birthday boy of the day. Actually, he's the only one, so he wins this contest by default.

-- OK, so Rostislav Olesz takes a late hit from Steve Downie, but since the Panthers didn't do much complaining about it -- and didn't do anything about it -- I won't pile on. But, this could be bad. Olesz bounced up off the ice in a lot of pain.

JM says he re-injured his surgically repaired wrist/hand area, although I'm not so sure. That was Rusty's right hand and it looked to me like he came up favoring his left. But we'll see. Either way, doesn't look good.

-- Also found out a little more about the tussle between Horton and Montador on Monday. Word is they jostled a little bit at the end of practice after coaches demanded to see more during a defensive drill in the corners. Tempers flared, and that isn't a bad thing. So they threw a couple punches. Big deal.

-- And JM tossed a wet blanket on our visit to the Spectrum. It's off. Team is going  to practice here at the Watchoveryourmoney Center instead. Sucks. I'm thinking of going over there anyway. Will post photos if I do.