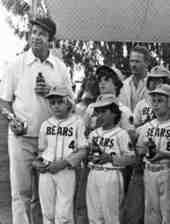 TERMINAL C, CHARLOTTE-DOUGLAS INTERNATIONAL AIRPORT, N.C. -- Blogging live from Charlotte, chilling in the airport waiting for my connecting flight to Toronto. Which is in Canada, for those of you who don't know.

Just got off the phone with Patrick Dorsey, your Herald beat writer today.

According to JM, Radek Dvorak has two broken bones in his hand, will be out four to six weeks. I spoke to Radek after Saturday's game, he was optimistic he was going to be OK. Apparently that's not the case.

No update on Jozef Stumpel and his troublesome right shoulder. JM said Saturday there was "slight separation" and Jozef is due to see a doctor today or tomorrow. He is not making the trip north, obviously.

Some good news though as it appears Ville Peltonen is good to go. He will be making the trip, although JM says he won't play Tuesday against the Leafs. Which means he probably will. Ville has been practicing since Thursday, so if he feels like he's in game shape, I figure he's in. The Panthers really don't have too many options here.

-- Did Mercury Morris really say to be undefeated, you have to win all your games? Seriously? That's classic stuff.

-- Funny, the only guy on Fox to predict the Giants' victory was Frank Caliendo. Solid job Frankie.

-- Congrats to Goldie for his Giants getting the big win. Goldie is a huge Giants fan and he was pretty happy last night.

-- Just got to Toronto. It's gray, cloudy and cold. Snow on the ground too.

And the duct-tape show is on. So there's that.