Going Back to PEI 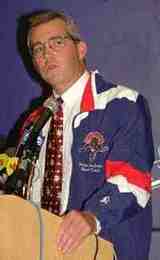 The Panthers preseason roadshow is apparently going to continue this summer/fall.

Right now, the Panthers plan to open training camp in Sunrise, then move on to Canada for a trio of exhibition games against the Calgary Keenans (twice) and the Edmonton Oilers.

The Panthers also have scheduled a game against the Islanders in Summerside, Prince Edward Island. It's the Panthers first appearance in PEI since Doug MacLean (who is a native of the island and is as popular there as their famous potatoes) brought his team there for training camp following the 1996 Stanley Cup Finals.

The Cats/Isles game is scheduled for Sept. 27; Florida is expected to visit Calgary on Monday, Sept. 22, with half the team taking a bus through Red Deer to play at Edmonton on Sept. 23. Guessing the other half of the team plays Calgary again on Sept. 24 or 25 before flying east to PEI.

Can't wait. Nothing like flying across Canada for a preseason game.

-- Great opening night for the Red Wings tonight, no? They had it going on, clamping down on the Penguins once picking up the lead before pouring it on. Think the young Pens learned something tonight, and may just be the better for it.