You Stay Classy, San Diego (And Thanks for Visiting. But Mostly, Stay Classy)

The Padres are in town tonight, and a good portion of fans at Joe Robbie Stadium will be of the four-legged variety as the team celebrates it's annual Bark in the Park night.

Few notes from this afternoon's bull session with Fredi Gonzalez. Josh Willingham is out and on the 15 day DL with his wonky back (full post below), Hanley Ramirez is being bumped to the third slot in the lineup with the Alfredo Amezaga/Cody Ross center field combo leading off. Anibal Sanchez pitched a bullpen session here at the Joe this afternoon, and Josh Johnson threw a BP session in Jupiter.

-- Marlins new look lineup kicking it old school from the start. Alfredo leads off with a double to center, scores on single and E9 off bat of Hermida. In second inning, Uggla (batting sixth instead of second) slams on into the club seats in left. In the second, Marlins up 2-0...

-- Good news for horse racing fans: You can bet the Kentucky Derby tomorrow, only catch is you can't do it at Calder. Because of a continued dispute with the Florida Horsemen, Calder cannot send its signal out of state (aside to New York) for wagering purposes. On the flip side, Kentucky's horsemen aren't allowing its signal to go to Calder (ironic, since Churchill Downs owns Calder).

You can bet the entire Derby Day card at Gulfstream tomorrow (see you there) or bet only the 134th Run for the Roses at Dania Jai-Alai or Pompano Park. Happy plunging!

-- Aside from dogs, should be quite a few fans up from the Keys tonight to root on Key West High grad Khalil Greene of the Padres. Greene is in his sixth season with the Pads after graduating from Clemson. And he draws a striking resemblance to a young Sean Penn. If they do a prequel -- or a remake of  Fast Times at Ridgemont High -- Khalil will get a call to play Spicoli. Compare, contrast and Aloha, Mr. Hand: 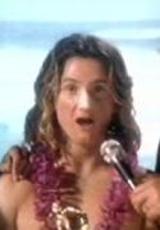 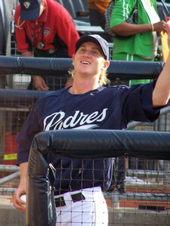