« Say Goodbye to Olli-Wood | Main | The Panthers Make Their Picks »

Offline and Back for More

KANATA, Ontario – Back in suburban Ottawa where for the second day, the mighty National Hockey League cannot figure out how to keep wireless internet working.

Seriously, folks, I’m no computer expert but it cannot be this hard to do something this simple. I know a lot of people out there don’t want to read about stuff like this, but it’s really hard to do your job when tools you’ve been promised cannot be delivered. It’s completely unacceptable.

Anyway, the second day of the draft is about to kick off, the Panthers leading things off with the first pick of the second round. Updates as I can get them out. Florida also has the 49th overall pick from the Olli Jokinen trade, and three more picks after that. Of course, the Cats could make some sort of a trade and add (or subtract) some picks. As I wrote before, over/under on Florida trades is set at three. We’re under right now.

-- Just spoke to Phoenix coach Wayne Gretzky. The Great One seems pretty psyched about the direction of his team, and loves the acquisition of Mr. Jokinen. Says putting the blame of Florida’s inabilities to make the playoffs solely on the back of Jokinen is not only not fair, but it isn’t accurate either.

“I’ve learned after 35 years in the National Hockey League that one guy doesn’t win or lose Stanley Cups,’’ said No. 99, who knows a little something about winning Stanley Cups.

“I’ve always said if that was the case, the Boston Bruins would have won 10 years in a row because Bobby Orr was by far the best player in the game. You really have to have the team. One guy can’t win or lose the Stanley Cup and that’s a fact. That’s what’s so great about getting your name on the Stanley Cup; it takes 20 guys. Each and every guy has to be part of it whether you play three minutes a game or 23.’’

He added: “You always want to win in a deal, but this one was good for both teams. They get a really good shutdown defender in Ballard. He has real good upside. He’s a young guy who is a good team guy. He’s physical and tough. And we get a big, strong, fast, lean centerman that we needed. Hopefully this is a deal that two years from now both teams say ‘wow, that was a good trade’.’’

On Olli having something to prove: “I think he’s excited and wants to show he can lead a team into the playoffs. He’s going to get his opportunity with us.’’

-- Former Panther broadcaster Dave Strader will start his second year in the desert this fall as the television voice of the Coyotes. He seemed pretty pumped to get Olli out west when I sent him a text message last night.

-- Tampa Bay GM Jay Feaster on Olli leaving the Southeast Division: “It’s one of those things where it’s a real mixed bag. We get [Olli] out but we get Ballard in. It never gets any easier. .-.-. [Ballard] is very tough to play against, is very talented. That’s going to be a big help to the Panthers. I know they gave up a front-line player, but they got a good one in return.’’ 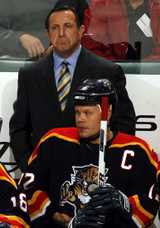 -- Have bonus Olli stuff all over MiamiHerald.com