Done With This Guy 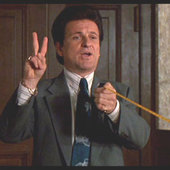 TSN in Canada is reporting that former Sharks coach Ron Wilson is indeed going to take the Maple Leafs gig, agreeing to a four-year deal to coach in the Centre of the Hockey Universe.

Don't know how much interest the Panthers had in Wilson -- or, more importantly, Wilson's interest in the Panthers -- but that is certainly moot now.

According to the TSN report, interim GM Cliff Fletcher said the two sides are close and had reached a verbal agreement, although "it is not on paper.''

JM told me, and other members of the South Florida media, that the Panthers' search was going to intensify this coming week.

Could be interesting, especially if something leaks out this week.

JM said he has narrowed his coaching candidates to four, and while he wouldn't confirm any of them -- other than saying he has spoken to Paul Maurice and has permission to speak with Perry Pearn -- I'm going to speculate who the four are.

Today's Frozen Poll asks who you would like to see coach the Panthers out of this bunch. Even though JM questioned where we all got Andre Savard as a candidate, I think where there's some smoke, there's fire and am putting him down as Candidate No. 5.

As always, comments are welcomed.

PS: On our last Frozen Poll, the question was whether the Panthers should hire the recently fired John Tortorella. A whopping 70 percent of you said yes. Was a little surprised with that one. But I don't see it happening for various -- and many obvious -- reasons.

Also, with Torts perhaps going to San Jose, that would leave Joel Quenneville available for the Panthers. So he's still in play.