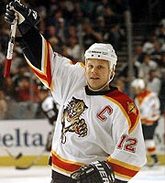 There was a report out there on the Wild Wild Web stating Olli Jokinen was on the verge of being traded.

According to this report, not only has a deal been done, but it could be announced as early as, well, any minute now!

It could have happened while I was watching the Marlins game.

Truth is, Olli Jokinen is still a member of the Panthers, and probably will be for at least a few more days. If not a week. Or two.

Heck, he may even be around for another month. Or two. Or five or six. You get the picture yet?

People I've spoken to within the organization say no trade involving Jokinen is forthcoming, although there is plenty of interest in the 29-year-old centerman.

A lot of people want to pry Jokinen away from the Panthers -- and for good reason. The guy is not only durable (hasn't missed a game since 2002) but has averaged over a point a game the past three seasons (1.02).

Pardon my grammar, but there ain't too many cats -- especially Cats -- who can put up those kind of offensive numbers.

And his contract numbers are equally impressive. Olli's getting a touch over $5 mil ($5.25 this coming season, $5.5 in 2009-10) over the next two signed seasons. That makes him real bargain, even in Florida.

That said, I do think the Panthers and Jokinen will probably part ways in the coming weeks. I don't think Olli and JM like each other very much, and if JM was still the coach, Olli would probably have found himself somewhere else.

But know this: JM is not going to trade Olli away out of spite, is not going to settle on a deal just to make the deal. Certain other GMs of this franchise may have made up their mind to trade a fella, then made sure that was done.

JM is not that kind of a GM.

Jacques Martin is patient to a fault, and is not going to be rushed into making a major deal like this without doing due diligence. Say what you want about the Chad Kilger deal -- and that was rushed -- but it was minor in scope. JM has had a long time to think about this one and knows what he wants in return.

If the Panthers swing a deal for Jokinen, expect an impact player coming back in return, with a depth guy and a first round draft pick as well. There's talk there might be a three-team deal cooking, but who knows. These rumors are always on the grill about this time, and 95 percent of the time they never see the light of day.

There have been few Panthers who have been part of trade rumors more than Jokinen, who was rumored to be on the way out about the time he was negotiating a four-year deal at the 2006 trade deadline.

Just remember this: The Panthers don't have to trade Olli. A number of people in the organization don't want to trade Olli. And JM won't trade Olli unless the deal is right, at least in his eyes, for the Florida Panthers and their ability to make a playoff run this coming season.

We may just see No. 12 back with the Sunrise Six in the fall.

Then we can start up the trade rumors all over again come February.

And now, BONUS Frozen Poll....vote early and often. Let G know how you feel about this hot button issue.