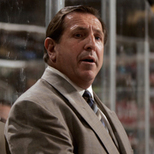 OTTAWA -- Spoke with Jacques Martin Thursday afternoon about the draft, Olli, the weather, good places to hang in Ottawa and Tim Hortons coffee (which is so good I've had two cups today and since I usually don't drink coffee I am bouncing off the walls writing run-on sentences and basically acting goofier than before if you can believe that)....

Anyway, JM says he "honestly doesn't know" if the Panthers are going to make a deal in the coming hours (my over/under set at three trades). He adds he really wants to shore up the defense in the coming weeks, either through trade or the start of the free agency period on July 1. Says the Panthers have six d-men under contract, with negotiations ongoing with 2007-08 d-guys Magnus 'Magnum' Johansson and Jassen Cullimore.

"If they aren't signed, they'll be free agents,'' Martin said about those two. "We've had conversations with them. We have to wait and see what happens at the draft, whether we acquire some defense, whether we move some people out. We'll wait until after the draft and re-evaluate where we are on defense.''

-- Lot of interest?: "Like any draft, you always talk to other general managers. Some teams are interested. He's a No. 1 center, a premier center. As I've always said, if the right deal is there, I'll do it. If not, hey. There's no time limit on this. Teams looking for a No. 1 center, the draft probably won't fulfill those needs. July 1 may be the same. I'll listen to what the offer is and make the right decision for the organization.''

-- On the 31st pick: "I believe we can get a good player. Look at last year where we got Michal Repik (40th). That's a good example. He was a second round guy, and this draft has even more depth. We should get a player of pretty good stature.''

-- On Rochester being an official deal (three years): "We've never had the coach there, Buffalo always supplied it. And [Randy Cunneyworth] was really good. But he's going to be more apt to play a system like the Sabres do. Now with our coaches, they can spend time with Peter [DeBoer] and talk about the type of system we're going to play. Then, hopefully they'll play the same style so when you call up a player they're ready to go and our familiar with our style of play.''

-- State of the organization: "We have to improve our defense. I like our goaltending, like our forwards. We have guys coming back, a good crop of kids who are beating down the door ready to play. We have some depth with [Wade] Belak. We feel good about that. Defense is the area that's our focus.''

-- On Noah Welch: "He's cleared to play and has done a lot of work rehabbing (his injured shoulder). We expect him to have a good summer of training and skating. Hopefully he comes in next year and earn a spot. He's going to dictate where he is. It's not his fault, not our fault, but he didn't play last year. He was injured. We acquired him -- and haven't changed our minds -- because we thought he could help our team. He's big, can skate, is strong and can move the puck.

"With a new coach, he's kind of in the same boat as everyone else. It's a fresh start.''

-- Some Steven Stamkos stuff that I cut out of tomorrow's story:

The immediate success former Ontario Hockey League stars Patrick Kane (Chicago’s reigning Rookie of the Year) and Edmonton’s Sam Gagner has given Stamkos confidence he will succeed with the Lightning next year.

“I saw a lot of those two guys over the years,’’ said Stamkos. “To see how well they’ve done in the NHL at such a young age, well, I’m in the same spot. I want to follow in their footsteps and get to the next level.’’