« More Fun from Sunrise | Main | As the Jokinen Turns »

Waiting for my delayed flight here in a very quiet Fort Lauderdale/Hollywood/Cooper City/Margate International Airport near Dania Jai-Alai, wondering who will be the first pick in the NHL Draft come Friday.

The Lightning, you may have heard, won the first pick in the lottery despite beating the Panthers in the final weeks of the season.

Don't know who they are going to pick. The Lightning have been very quiet about this whole thing, not letting its guard down to reveal the top pick. It's a light draft, not many good players. Sure we won't see any of these players for a long time.

-- What's that you said? Steven Stamkos? Who?

-- Think the Bolts are geeked up about this draft? The team is holding three -- yup, three -- separate draft parties in the Bay area. Haven't heard about a Panthers party yet. Perhaps some of you all can meet up in the Quarterdeck parking lot for Saturday's first pick of the second round.

-- Of course, the Panthers could just have a pick or two in the first round despite not currently having one.

Big news in Pantherland is that TSN is reporting that Olli Jokinen has "indicated" that he would like to be traded. If this is true, it's a complete reversal from things I have heard from Camp Jokinen. If it's true (and I don't really doubt the validity of the report), I think Olli figured he was gone anyway, might as well make it look like he had some control over things.

Still, JM does not have to make a deal at this draft for Olli, and I think it's going to take a pretty substantial deal to make things go down. Of course, he could trade Olli for a draft pick and a case of Molsons for all I know.

-- Don't forget to keep checking back throughout the weekend. Going to be Draft Central right here (well, we'll see what happens). As always, if any news is happening, I'll post here first. 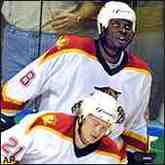 -- Good news out of Miami today. The Miami Toros -- a junior team that plays out of Kendall -- is going to introduce former Panther tough Peter Worrell as its coach.

Had an email forwarded to me (memo to the Toros: It's grichards@miamiherald.com), but won't be able to get onto the 2 p.m. conference call because I'll be in Canada (I hope) and it costs like $1.75 a minute to use a cellular phone up there.

Anyway, good look to Pete and the Toros.

-- If you haven't heard already, Rangers assistant Perry Pearn is a little miffed JM didn't call him and let him know A) the Panthers gig was going to Pete DeBoer and B) he wouldn't be getting an interview for the job that was, well, now filled.

Pearn had knee replacement surgery this offseason and was rehabbing it to make the flight to SoFla to talk with JM the GM. It's a meeting that never took place. You can read all about the slight here in the Edmonton Journal.