Back to Work -- Not Really 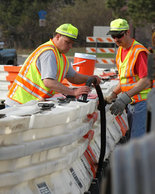 Just checking in since it's been a few days since my last post.

There has been some news, with the Panthers hiring Benoit Groulx from the Quebec Major Juniors to coach the Rochester Americans. Appears to be a pretty good hire, Benoit is held in high regard by a lot of hockey people I've talked to. This is a guy on the rise. Look forward to meeting him at training camp in the coming weeks.

If you would like to read more about Benoit, check out Kevin O's fine piece in the Rochester Democrat, Republican and Whig. I would do more, but I'm on vacation now, so I'm trying to keep the workload light.

-- Was at Incredible Ice on Wednesday as a number of Panthers have made their way back south and have begun informal workouts on the ice. Mike Van Ryn was out there in a Panthers jersey, although we all know he probably won't be wearing that for much longer. Ryno is upbeat as ever, although I'm sure he'd like to hear something one way or another. He says he hasn't heard anything on the trade front.

Know this though: Ryno's shot looks pretty good. He was ripping off some pretty nice wrist shots, and it looks like this last surgery took. "I told you,'' he said. "My wrists feel great. I'm back to normal.'' A lot of the guys were joking that the trade may be off, since JM was watching from above as Ryno was scoring on whomever was in net -- including Tomas Vokoun and some guy named Luongo.

Other players in attendance the day I was there: Wade Belak ("shoulder feels good, I'll be ready for camp.''), Nathan Horton, Anthony Stewart, Bryan Allen, Vokoun and MVR. Guys are trickling in as the summer shortens.

-- Have heard Richard Zednik's name tossed about as being possibly traded to Toronto along with MVR. Have not been able to confirm this in anyway shape or form, but this wouldn't surprise me. As much as the Panthers like Zednik, there is a thought there that once he comes back his past injury is going to be a distraction. And it will be.

Whatever city the Panthers go to, the local media is going to want to talk to Zednik and do a big story on him. It's natural. And that means players like Stephen Weiss, Bryan Allen -- anyone who was here last year -- is going to be asked to comment on said story on just about every road trip. Which means the Panthers won't be able to put that horrific incident behind them.

On the flip side, can you imagine the sound that rises from the Big Bank on Opening Night when Zednik is introduced to the home crowd? You have to start him on Opening Night. You just have to.